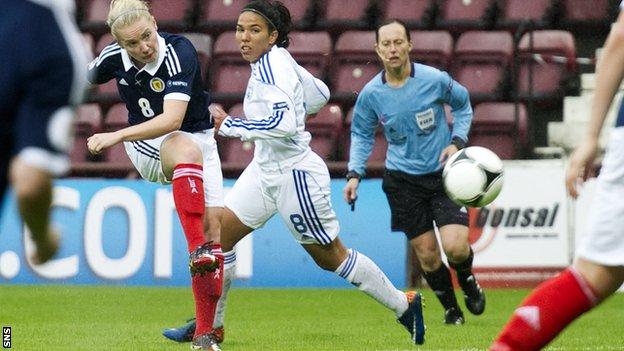 Kim Little hailed her Seattle Reign debut as "perfect" after the Scotland midfielder scored two goals in a 3-0 win over Boston Breakers.

The 23-year-old, who landed in America a few hours before kick-off and had not trained with her new team, was named player of the match.

"To get a win and score two goals was great," said Little. "It was a great first game, it was pretty perfect.

"I felt surprisingly good considering I was on a nine-hour flight yesterday."

Little is relishing working with Seattle manager Laura Harvey, who was also her boss at former club Arsenal.

"Laura knows exactly how I want to play. We worked well together at Arsenal and hopefully we can continue the form we showed today into the next games.

"You can see from the performance against Boston how could we can be."

Harvey was delighted with Little's display in the opening match of the National Women's Soccer League season.

And she has told Seattle supporters the Scot is going to get even better.

"We had a conversation before the game and I told her just to keep me informed about how she felt. She said her body was alright but her mind was a bit like 'ok, I've got to run now'.

"But that's Kim Little in a nutshell, she's a winner, she's a goalscorer, and she's got a lot more to show."