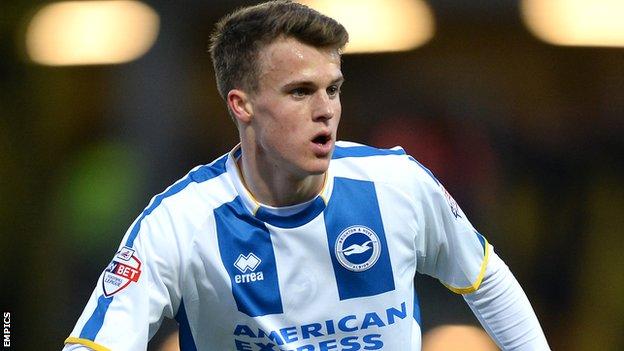 Brighton youngster Solly March hopes he can keep improving after committing his long-term future to the club.

The 19-year-old winger, who made his first-team debut in August, recently extended his contract until 2018.

"Hopefully I can keep pushing on further and my performances will get better and better the more I play. That is the aim really," he told BBC Sussex.

"I've only started five games in the Championship so there is a lot more work to do."

It's hard for any young player to break through into the first team, but it is even harder to stay there. That is the next challenge for Solly

After impressing for the Sussex's club's development squad last season March has made a total of 23 senior appearances in the current campaign, scoring once.

The forward, who had spells on the books at Chelsea and Lewes before joining Brighton in December 2011, was excited to extend his deal at the Amex Stadium.

"Hopefully it will be a good four years for me and the club," he said.

"With a new training ground and the club pushing forward it will hopefully be a great time for me.

"I've got to keep training and working hard and hopefully I can keep impressing and playing better.

"I've had to adapt from the development squad and it is a lot more physical. A lot of senior players in the team help me along."

"It's hard for any young player to break through into the first team, but it is even harder to stay there," Garcia told the club website.

"That is the next challenge for Solly. He has the capability and if he continues to work hard I am confident he will achieve that."