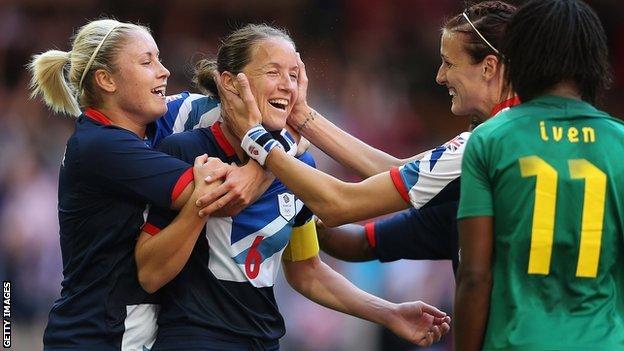 England and Arsenal Ladies defender Casey Stoney is writing a regular column for the BBC Sport website this season.

This time she talks about losing the England captaincy to Steph Houghton, Arsenal's start to the season and how Liverpool have done the Women's Super League a huge favour.

It only lasted 692 days but captaining my country and Great Britain in the London 2012 Olympics has been the biggest honour of my career.

To lose that role has been absolutely devastating. It has never happened before because previous captains have either retired or not been picked. Before me, Faye White stepped down because she was pregnant.

It was a short but sweet experience. I'm not sure anyone else will get a chance to be skipper at a home Olympics, playing in front of 70,000 people at Wembley Stadium, so I reflect with so much pride that I got the opportunity to do that. At the time, it was like a dream you didn't want to end.

But new England head coach Mark Sampson has chosen Manchester City defender Steph Houghton as the new captain and I accept and respect the decision.

Mark said he chose her for the long term, nothing else, and I fully support Steph. Like me, she has overcome a lot to get to where she is.

I know it can be a difficult job at times, such as when we crashed out of Euro 2013, and I did the best I could. I learned a lot about myself, I always took responsibility and I always put the team before myself.

I have had long conversations with Steph to let her know that my door is always open but I have a different fight now: after being injured for the last few games, I have to try to win back my England shirt.

When I was told I would no longer be captain my first thought was, where do I stand now? What is my future in the England team? I had that conversation with Mark because I needed to know what his plans were and whether I was still part of the picture.

For now, it appears I am. This isn't my hobby, it's my life and I've worked so hard to get where I am now. I still believe I have a lot to give the England team, both on the pitch and being a help to some of the younger players off it. I just have to prove that to Mark now.

No expectations for Arsenal this season

Finding out about the England captaincy capped a tough couple of weeks as it came soon after my club side Arsenal lost to Birmingham in the Champions League.

Going into the game I had no doubt we could overturn our first-leg defeat and reach the semi-finals but Birmingham deserved it. They had a game plan and executed it very well.

We could easily have analysed it to death afterwards but sometimes you have to let it go and just accept we have to raise our levels.

Arsenal have lost some key players over the winter. Steph and fellow internationals Kim Little, Katie Chapman, Gemma Davison and Ellen White all left and if you take those players out of any side it will take time for those who remain to gel - and we haven't got that time. Our first league game in the Women's Super League is on Wednesday night against Notts County.

The Champions League defeat has taught us a lot. We have some great players. The Japanese internationals Shinobu Ohno and Yukari Kinga are absolute class and if we can get them playing effectively in our team, we can have a good season.

I'll be honest, I don't think anybody is expecting anything of us, which is the first time that has happened in about 10-15 years. The expectation is on Manchester City or Chelsea, because those teams have made a lot of signings. The pressure is off us, so we can just go out and play.

The WSL's debt to Liverpool

The best thing that happened to women's football was Liverpool Ladies winning the league last year.

The fact they won it after training on a full-time basis forced a lot of other clubs to do the same. If they want to compete this season they must match the regime of Matt Beard's Liverpool side, and many including Arsenal, Chelsea, Manchester City and Notts County have. That's a great thing for women's football.

The WSL has split into two divisions this season, so the competition will be fiercer than ever at both ends of the table. No-one will want to be relegated because the financial impact of going down will be massive.

The other difference this year is that there are world-class players in every team. We've never had World Cup winners in the league before and now there are three.

Arsenal won the top-flight for nine successive years before Liverpool broke the mould. They have proven that the title is not a one-horse race anymore and that's what makes it exciting.

I think Liverpool and Chelsea will be up there and I'd love to see us challenging too but if you are pushing me perhaps Chelsea might come out on top because of the quality of the signings they have made.

It has all the hallmarks of a great season and I expect it to go right to the last game of the season as it did last year.