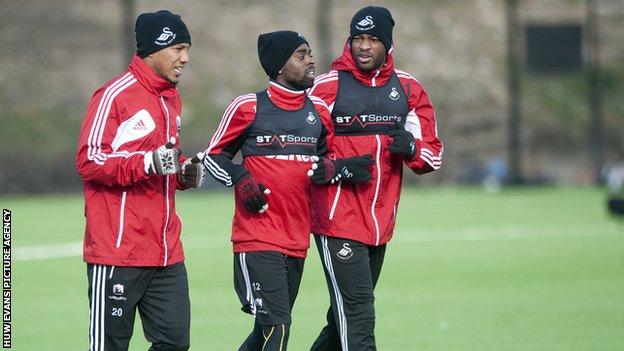 Nathan Dyer says that a training-ground bust-up among Swansea players this week has been "blown out of proportion".

A spokesperson for the Premier League club has confirmed that "a couple of incidents between certain players" took place before the 1-0 loss to Chelsea.

But Dyer says the performance against title-chasing Chelsea - if not the result - proves there is squad unity.

"The report has blown everything out of proportion and it is not what it seems," said Swansea winger Dyer.

"We are a good bunch and we work hard for each other."

Sunday's defeat at the Liberty Stadium left the Swans in 15th place, just three points above the relegation zone.

But Dyer says that the players are focused fully on keeping the Welsh club in the Premier League as they face a crunch last four games of the season.

"The mood in the camp is very good," added Dyer, speaking to the Swansea website.

"We lost to Chelsea on the weekend, but the performance was good and we worked extremely hard considering we had 10 men for 75 minutes [after Chico Flores was sent off]. We may have even got something in the end.

"I know there has been a report in the press today about a training ground bust-up, but I think all the effort and commitment on display against Chelsea proved that we are all working for each other - and not against each other as is being suggested."

Garry Monk's side go to Newcastle on Saturday, then face Aston Villa, Southampton and Sunderland.

"We are all fully focussed on the last four games and we owe the fans a win or two before the end of the season," Dyer said.

"The support they gave us against Chelsea, especially in the second half when we needed them more than ever, was amazing. The Liberty Stadium was rocking and everyone around the world could see and hear that for themselves.

"Whatever some people may say on the outside, we know our fans are with us and will remain with us until the very end. They are the important ones in all of this and we want to finish the job for them."

Last week's flare-up was not the first time Swansea have had problems at training this season.

In January, defenders Flores and Monk were involved in an incident at the training ground.

The Swans confirmed the police were called out to that incident after a member of the public phoned them.

Monk subsequently took over from Michael Laudrup as caretaker manager.