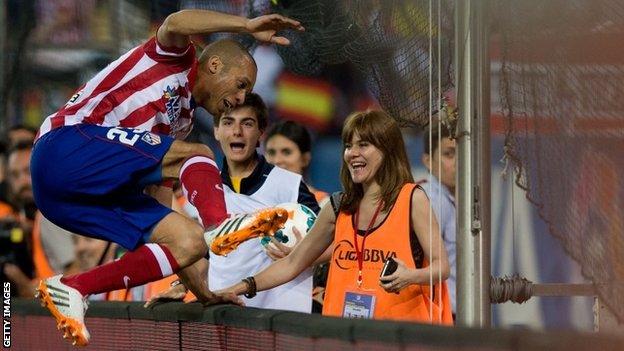 Atletico Madrid are three wins from their first La Liga title since 1996 following a tense victory over Elche.

The hosts had a penalty early in the second half but David Villa's weak kick was saved by keeper Manu Herrera.

Brazilian centre-back Miranda put them ahead 18 minutes from the end with a header from Jose Sosa's corner.

And Diego Costa wrapped up victory in injury time with a second penalty after being fouled by Cristian Sapunaru, who was sent off.

The result means that they are six points clear of Real Madrid and seven above Barcelona, although Atletico have played a game more than each of their two title rivals.

If Diego Simeone's side win their next three games - away to Valencia and Levante and at home to Malaga - they will be champions before their final-day match away to Barcelona.

It would be the first time in a decade that neither Real Madrid nor Barcelona have won the Spanish title.

And Atletico, who had won seven consecutive league matches coming into the game, looked to be feeling the pressure in the first half.

They struggled to create any real chances, and Elche had two good opportunities just before the half-hour mark.

Javier Marquez forced a sprawling save from Thibaut Courtois, who then pulled off a fantastic save moments later to keep out Sapunaru's header.

Villa, who was below-par throughout, should have given the hosts a half-time lead but he reacted too slowly to Costa's glanced header and turned the ball wide.

Just three minutes into the second half came their major opportunity to open the scoring. Sapunaru brought down half-time substitute Raul Garcia and was shown a yellow card.

Villa took the kick, because Costa has missed three penalties this season, but his effort was central and weak.

That looked like proving costly for Atletico until the 72nd minute when Miranda headed home to give them the lead.

And in injury-time the game was sealed when Sapunaru fouled Costa, who stepped up to score the penalty after Villa had been substituted earlier.

Next up for Atletico is their Champions League semi-final first leg with Chelsea on Tuesday as they continue to chase the unlikeliest of doubles.