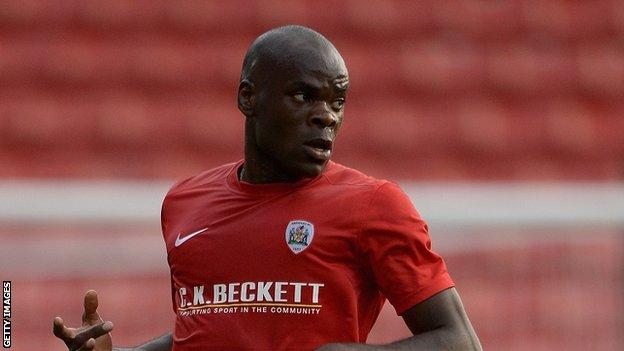 Manager Danny Wilson has paid tribute to Jean-Yves M'voto after the defender played a key role in Barnsley's vital win at Charlton on Tuesday.

M'voto's first goal for the club put the Tykes ahead, but it was his work at the back which impressed Wilson.

"He's not put a foot wrong since he's been in the team, he's been excellent," Wilson told BBC Radio Sheffield.

Jean is playing with a lot of confidence, the fans have really taken him to their hearts

"The way he is dominating at the back, he can only get better, and his goal put the icing on the cake."

The former France youth international, 25, initially moved to England with Sunderland in January 2008 before joining Oldham in June 2011.

He signed for Barnsley in July 2013 and was a regular starter before the FA Cup defeat against Coventry at the beginning of January.

He came back into the team for the match against league leaders Leicester in March, and has been ever-present since then.

"He's playing with a lot of confidence, his team-mates and the fans have given him that, the fans have really taken him to their hearts," said Wilson.

"But I was delighted with all aspects of the game, the approach before we got here was spot-on, we've had a calmness about us all week.

"We were disappointed with the result at Bolton on Saturday, because we felt we deserved something, but the performance was good, and we felt if we could put something like that together again we would have a chance."

But Wilson said the result would be meaningless unless his players maintained that level of performance.

He said: "We had five games left before this had to start winning quickly.

"Now we have to put the same processes together for Leeds United on Saturday. It will be a very, very tough game, even tougher because of the position we are in.

"We're still two points adrift, in the relegation zone, so have to keep pushing forward.

"Leeds are getting a bit of stability, or they think are, with the new owner coming in, which might help [manager] Brian [McDermott] get a bit of stability on the pitch, but that's not our concern. We have to put on the same performance as we have been recently."

Wilson added that it was unlikely Kelvin Etuhu, who left the pitch with an ankle injury against Charlton, will be available against Leeds.