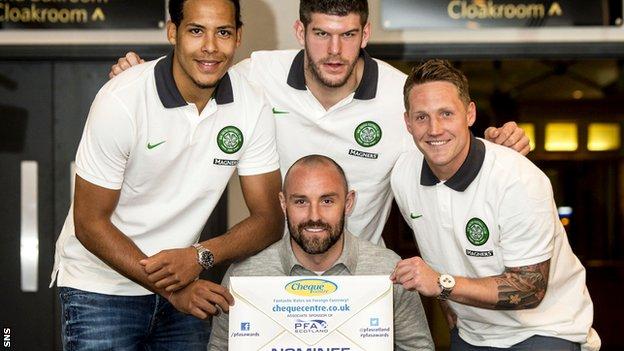 Three Celtic players have been shortlisted for the PFA Scotland Premiership player of the year award.

"There's no greater honour in football than to be voted the best player in your country by your fellow professionals."

Celtic goalkeeper Forster broke the Scottish top-flight clean sheet record this season, going 1,256 minutes without conceding a goal, while Dutchman Van Dijk has been a star performer in defence for the champions.

Commons has become the bookmakers' favourite to take the award and credited manager Neil Lennon for inspiring such a successful season.

"You can't take away what he's done at the club," said the former Scotland midfielder. "He is in the elite group of Celtic managers who have won three titles in a row and his record speaks for itself.

"In Europe, he got underdogs all the way to the last 16 of the Champions League at the second time of asking.

"So he is an up-and-coming manager, still young in the game, but for me he's played a massive part in the latter parts of my career that have given me my best playing years."

Meanwhile, Van Dijk was full of praise for Forster after a season when the goalkeeper won his first England cap.

"He is, I think, one of the best goalkeepers in the world maybe," he said. "He is not only a phenomenal goalkeeper but a great guy off the pitch."

In the young player category, midfielders Gauld and Armstrong and defender Robertson have shone for Scottish Cup finalists United.

Frontman May, who has scored 18 league goals this season, netted twice as Saints beat Aberdeen to set up a final date with the Tangerines.

The winners of the awards will be announced on 27 April.

Last year's picks were both strikers. Michael Higdon, then of Motherwell but now with NEC Nijmegen, won the main award, with Leigh Griffiths, now with Celtic, took the young player accolade while with Hibernian.