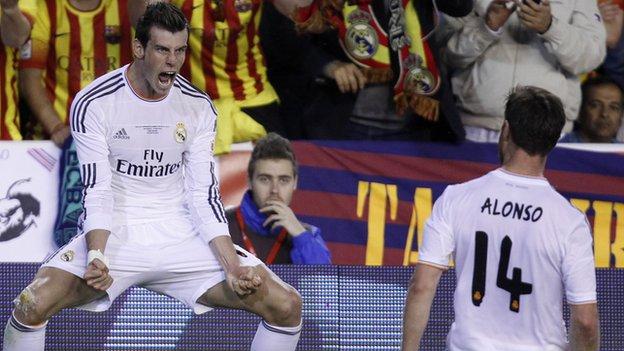 Is Bale the Real deal?

Barca levelled through Bartra's second-half header but it was Real celebrating after Bale's winner.

Former Tottenham star Bale had been accused of not delivering in Madrid's big matches since arriving at the Bernabeu in a world record £85m switch last summer.

But, without the injured Cristiano Ronaldo alongside him, the 24-year-old took centre stage with a moment of inspiration which swung a delicately-balanced final in favour of Carlo Ancelotti's side at a crucial stage.

With Barcelona pressing for a winner, Real countered quickly with pace - a tactic which they had employed throughout - to snatch the first silverware of the Spanish season.

Barcelona forward Lionel Messi, a largely anonymous figure, lost possession in the Madrid penalty area before Fabio Coentrao launched the attack with a long ball down the left touchline towards Bale.

Bale knocked the ball into the empty Barcelona half and, despite Bartra's best efforts to lever him off the ball, managed to keep his feet before squeezing past Pinto at his near post.

It was a bitter blow for Barcelona, who had showed character and resilience to fight their way back into the tie.

The Catalans dominated possession throughout but failed to test the recalled Iker Casillas, who has been Diego Lopez's understudy in La Liga but a starter in the Copa del Rey, with regularity or substance.

Gareth Bale had only managed one shot in 151 minutes against Barcelona before the Copa del Rey final.

It has been a familiar pattern in coach Tata Martino's first season at the Nou Camp, leading to criticism of the Argentine's methods and doubts over his long-term future.

Martino was tactically outwitted by Real counterpart Ancelotti - for the first time this season after Barca won at both the Nou Camp and Bernabeu - as the Italian's players carried out his instructions to the letter. Madrid were organised and committed as they defended resolutely in numbers before utilising the pace of Bale and Di Maria on the break.

The Argentina international latched on to Karim Benzema's pass before shooting across Pinto, only playing because of Victor Valdes's continuing absence through injury, for the 11th-minute opener.

Barca dictated the play after Real's goal, without managing to stretch Casillas, and continued to patiently probe for an opening after the break.

Despite barely meriting an equaliser, they were level when Bartra was left unmarked to powerfully head Xavi's 68th-minute corner into the top corner.

After Bale put Madrid back in front, Barcelona almost recovered for a second time in the dying stages. Neymar poked a shot past Casillas, only to see his effort cannon back off the Real post into the grateful hands of the Spain international.

It is their second Copa del Rey in four years after they beat the Catalan club in the 2011 showpiece.

The Catalans have endured a miserable season by their own high standards, with a series of off-the-field troubles compounding their below-par performances on the pitch.

The club's reputation has taken a battering over the past few months following the tax scandal surrounding last summer's £50m signing of Brazil star Neymar and a Fifa transfer ban for breaking rules on signing teenage players last month.

On top of that, the prospect of a rare trophyless season is now a strong possibility.

The reigning Spanish champions are third in La Liga, four points adrift of leaders Atletico and one behind Real, with five games remaining and were eliminated from the Champions League by Atletico last week.

By contrast, Bale's late goal allowed Real to take the first step towards a potential treble - as they are also pushing to win La Liga and the Champions League, in which they face Bayern Munich in the last four.