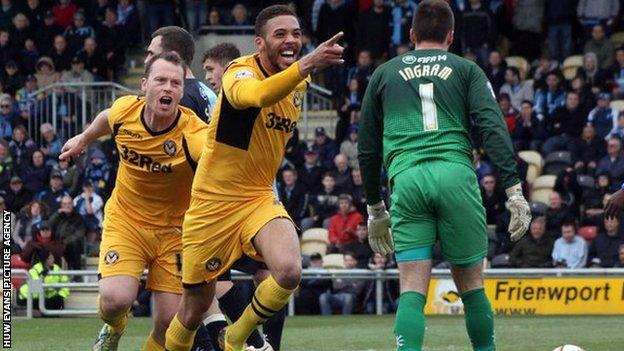 Jolley ended a run of 33 games without a goal in last Saturday's win over Wycombe Wanderers.

The 25-year-old is relieved his barren run has come to an end ahead of Friday's game at former club AFC Wimbledon.

"I haven't felt like I've contributed as much as I did last season," he said.

Jolley claimed his first goal since the opening day of an injury-hit season by turning in Ryan Jackson's header from close range for Newport's opener against Wycombe.

"I knew I could score, but... I haven't experienced going looking for them before so it was new to me," Jolley added.

"I put a lot of pressure on myself so it has been difficult, but the gaffer [Justin Edinburgh] relieved the pressure off me and so have the boys.

"The boys stuck with me and fortunately the chance came my way.

"It was nice to get an opportunity and help the team out."

Jolley says the win over relegation-threatened Wycombe was a "massive result" but insists Newport are not mathematically safe.

"If we would have lost the game we could have been right in the thick of things," Jolley said.

"I couldn't tell you who's going down because at the moment they're really grinding it out."

Newport have four games of the season remaining, starting against AFC Wimbledon, where Jolley spent two and a half seasons before joining the Exiles in a permanent move following a loan spell there.

County will be looking to secure back to back League Two wins for the first time since December.

"They gave me my first opportunity so I'm looking forward to going back and seeing everyone and seeing what sort of response I get from the fans," Jolley said.