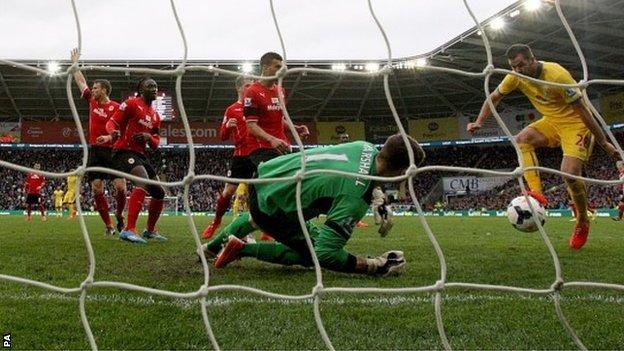 Cardiff's 3-0 defeat by Crystal Palace in early April should not be allowed to stand, the Welsh club have said in a five-page letter seen by the BBC.

The document, sent by club lawyers to the Premier League, alleges Palace boss Tony Pulis knew sporting director Iain Moody was trying to obtain their starting line-up before the game.

The club say they have proof Moody succeeded. Pulis declined to comment when contacted by the BBC, although Palace previously denied the claims.

A Cardiff spokesman said on Thursday: "A formal complaint has been submitted, concerning what we consider to be a serious breach of Premier League rules.

"We have asked for an investigation into the matter, which is now in the hands of Premier League officials who will report their findings in due course.

"At this time it would be inappropriate to discuss any specifics while the investigation is ongoing. The club has every faith in the process and will welcome the views of the Premier League."

The Premier League has confirmed it has received the complaint from Cardiff and is assessing the evidence to see if there is a case to answer.

If Cardiff's complaint is upheld, this would effectively mean a three-point deduction for Palace that, despite their 3-2 win at Everton on Wednesday, could have implications, not only for the south London club, but for many other teams fighting against relegation.

Palace are 11th in the table, while Cardiff are 19th, three points from safety.

Cardiff allege the events leading up to the game on 5 April raise serious questions, not only about the conduct of staff at both clubs but about the integrity of the game between them.

Moody has already publicly denied attempting to obtain the Cardiff line-up, or directly contacting anyone at the club.

Despite that, Cardiff insist Moody, a former director of recruitment at the Welsh club, phoned a former colleague, performance analyst Enda Barron, on 3 April. It is alleged he called to ask Barron if he could help him obtain the team for the match against Palace.

Although Barron told Cardiff he was unable to provide Moody with the information, he has since left the club. Cardiff claim Moody induced Baron into breaching his contract. Barron was unavailable for comment.

Cardiff allege that by Friday, 4 April - a day before the match - Moody had obtained the starting line-up from another source. This is based on a follow-up conversation between Moody and Barron in which the Palace sporting director told him he now had the team.

It is this exchange that forms the basis of the claim against Pulis, as Moody is alleged to have told Barron he had to go elsewhere for the information because he was "under pressure from Pulis".

Cardiff then claim Moody mistakenly sent a text message with the starting XI to Bolton manager Dougie Freedman a day before the game.

Freedman is said to have tipped off Bluebirds boss Ole Gunnar Solskjaer about the leak because they are friends, having attended coaching courses together.

While Aron Gunnarsson is named as the source of the leak in Moody's text, the Cardiff player has denied to the club that he was behind it. His agent, Jerry de Koning, has also denied leaking the team.

For now, Cardiff have accepted the explanations and do not know who gave Moody the information. One of the reasons they want the Premier League to investigate is to find out who might be responsible.

This turned out to be the exact starting line-up for the game against Palace. It contained three changes from their previous Premier League match, against West Bromwich Albion on 29 March.

Cardiff say that, in a meeting last week, Solskjaer placed on record the details of a brief exchange between him and Pulis immediately after the game at the Cardiff City Stadium.

It is claimed Solskjaer said to Pulis: "I am disgusted that your head of recruitment [Moody] is texting one of my players to get our team."

Pulis allegedly responded: "Oooh, I know. I didn't ask for it."

Cardiff claim this is evidence Pulis knew about the team well in advance of the set time for the exchange of team-sheets on the day of the game - one hour before kick-off.

According to Cardiff, all this amounts to a serious breach of the spirit of the Premier League's chairman's charter, which requires clubs to behave with "utmost good faith and honesty to each other".

Specifically, Cardiff say Palace have broken three Premier League rules: B15, B16 and B17. Of these, B17 is potentially the most serious as it states that no club shall disclose or divulge confidential information.

They also claim Palace have breached the Football Association's rules by bringing the game into disrepute, although at this stage a formal complaint has not been lodged with the FA.

Significantly, Cardiff claim Palace's actions were "an attempt to obtain a sporting advantage".

Nevertheless, Cardiff say the "result from the match should not be allowed to stand" and urge the Premier League to deal with the matter as soon as possible, arguing that, with just a few games to go to the end of the season, such a reversal could have a huge impact on the league positions of other teams.

The Premier League is understood to be treating the complaint seriously, although it believes any inquiry would focus on the conduct of the clubs and their staff, rather than an investigation into the integrity of the match.

Cardiff insist Palace have cheated and that the whole episode undermines the spirit and integrity of the competition. Thus the Premier League will not be able to dismiss the issue lightly, especially with so much money at stake for those teams that are relegated.

Despite attempts by the BBC to obtain a response from Moody and Crystal Palace, they have not yet commented on Cardiff's allegations.