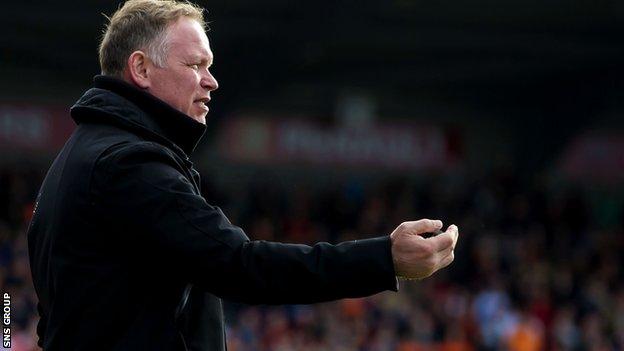 Manager John Hughes is asking his players for one last push during the post-split fixtures as Inverness chase a first-ever European place.

"We've already achieved the points total we had last year," he said ahead of Friday's home game with Aberdeen.

"So you say to yourself 'absolutely different class'. Now we are at the final stage, let's go and give these remaining games everything we've got."

Inverness were beaten on penalties by Aberdeen in the final of the League Cup last month, but Hughes insists that game will have no bearing on the next fixture.

The Dons missed out on a place in the Scottish Cup final, losing out to St Johnstone on Sunday, while the Highlanders enjoyed a free weekend.

"The League Cup final is in the history books, it's long gone and we've moved on," Hughes told BBC Scotland.

"Now we have to go and perform, that's for sure. We're going in with confidence and we want to show Aberdeen we are in the top six on merit.

"The message for the players is be scared of that wounded animal. Aberdeen will be hurting, but they still have aspirations to get that second spot and a European place.

"So have we, so all the ingredients are there for a cracking game."

Aberdeen's last visit to the Caledonian Stadium was certainly eventful, with the visitors racing into a 4-0 half-time lead, only to end up hanging on for a 4-3 victory.

"We'll be taking the game to Aberdeen," added Hughes. "Training has been really good and I think that's because we gave them a weekend off.

"We've been hard at it for a number of months. We've been asking players to go out there carrying knocks.

"They have come back sharp and hopefully we can take that into the game.

"The pleasing thing for me is that I'm starting to see our training methods manifesting in our style of play; our ball retention, creating chances and getting support to Billy McKay.

"The players are enjoying it. We're capturing their imagination and asking questions of them."

Graeme Shinnie will miss the match through suspension, while captain Richie Foran will not play again this term after a minor knee operation.

On his skipper's recovery, Hughes explained: "There is no time scale on it, but I'd like to think he'll be back doing a bit of training before the season finishes."