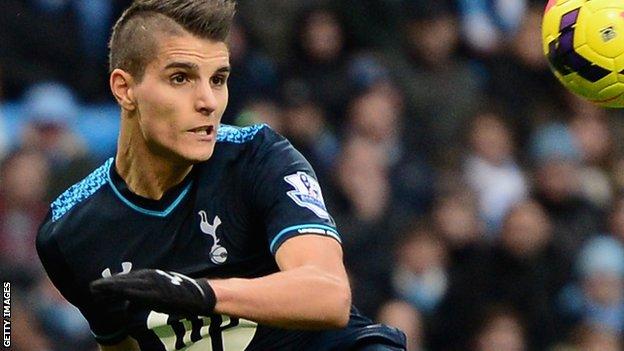 Tottenham's record signing Erik Lamela will miss the remaining games of this season because of a back injury, manager Tim Sherwood says.

The midfielder, 22, signed from Roma last summer for £30m as a replacement for Real Madrid-bound Gareth Bale.

But injury has restricted Lamela to 17 Spurs appearances, the last of which came at Stoke on 29 December.

"There'll be no chance Erik's fit," said Sherwood ahead of Saturday's visit of Fulham.

"I read in the paper, or someone told me, that the hierarchy here are asking for him to get more opportunities.

"Chance would be a fine thing, he's injured."

Argentina international Lamela scored 15 goals in Serie A last season for Roma, including two goals in a 4-2 win over Milan in December 2012. However, he has yet to find that form in the Premier League, where he is still looking for his first goal.

His only Spurs strike so far came in the 2-1 Europa League win over Sheriff Tiraspol in November.

"I've assessed the rest of the squad and I've got my ideas on who's capable and probably who's not. With Erik, the jury's still out because I haven't seen enough of him - so he's been very unfortunate.

"I think he was fit for about three weeks while I was in charge, and then he's been out injured."