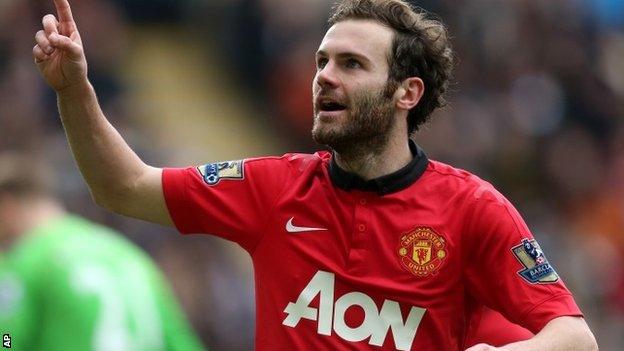 United, who have not finished lower than third in the top flight since 1991, currently lie seventh.

"Even before I came, things were difficult here, so I knew I wasn't coming to a side that was going to win, win and win," said Mata, 25.

Moyes, who replaced Sir Alex Ferguson as manager last July, is set to miss out on Champions League qualification, with United on course for their worst season in the Premier League, a year after finishing top.

But midfielder Mata, who joined United from Chelsea in January for £37.1m, expects a number of new signings to help the manager reverse the club's fortunes.

"I have no doubt about it," Mata told the Daily Mirror.

"When I joined, in all my conversations with the board and the manager about next season, they were confident about getting the right players.

"They know, and I know, we're in a transitional moment, but in the summer they're going to try to sign a few players and I have the faith they are going to bring top players in.

"I'm sure this club is going to come back and fight for every trophy.

"Since I was a kid, Manchester United was fighting for everything, This moment is going to come back for sure.