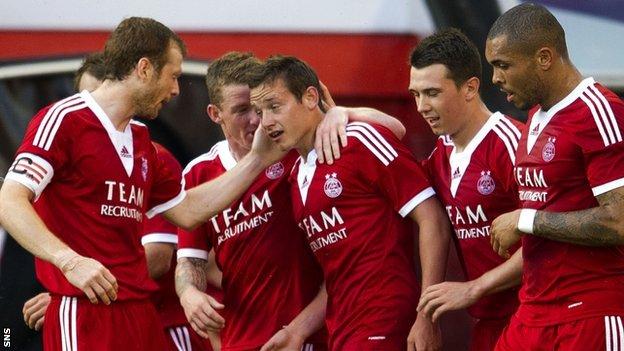 Aberdeen manager Derek McInnes is surprised that none of his players made the PFA Scotland awards shortlist.

The Dons have won the League Cup and sit second in the Scottish Premiership.

"I think there's a couple of our players would have run close and I'm surprised about one or two that have been mentioned," said McInnes.

"But it's the players that vote for it and there is nothing you can do. I have a high opinion of my squad and a few players in particular have stood out."

If you can get that second place, for me, it is a bigger achievement than any cup

"It's disappointing, but in the big scheme of things it's not about personal glory, it's always about trying to achieve things together," said McInnes.

"I don't think there will be too many disappointed. We are just concentrating on the job in hand."

Former Celtic, Dundee United and Middlesbrough midfielder Willo Flood has been one of Aberdeen's top performers this season.

However, the 29-year-old Irishman had few complaints about the awards list, although he thought that Dons midfielders Ryan Jack and Peter Pawlett might have been among the young player nominees.

"Obviously we've had some decent players, like Ryan Jack not being in the young player of the year was a bit of a shock and Peter Pawlett, but to be fair to the nominations, they all deserve to be up there," he said.

Aberdeen's dream of lifting two trophies this season ended with defeat by St Johnstone in Sunday's semi-final of the Scottish Cup.

"The lads were a bit disappointed after the game, but we now have five cup finals coming up and we want to make sure our own little cup final comes up at the end and that's second place," added Flood.

If we don't get into Europe, it would be a disappointment for us, but we know we've got the squad of players and management staff to get that place.

"Getting second place is probably a bigger achievement because it's over a longer distance and you play a lot more games.

"If you can get that second place, for me, it is a bigger achievement than any cup."