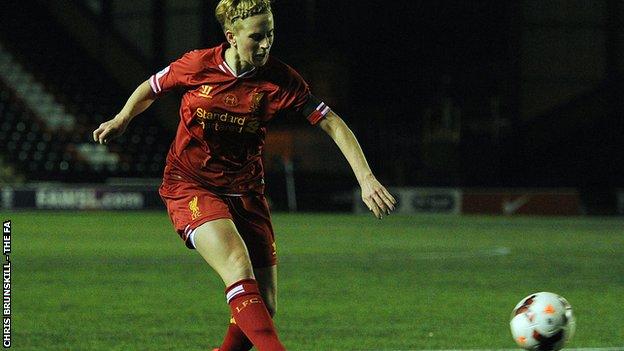 City, on their WSL debut, were on the back foot for long spells but striker Toni Duggan went close to equalising Dowie's 71st-minute winner.

Manchester City, making their Super League debut, were given a tough start as Liverpool pressed for an opener.

But after winger Gemma Davison, a close-season signing from Arsenal, had gone close, Dowie shot straight at goalkeeper Andrea Worrall when clean through.

The Reds started the second half as they had the first and Davison shot from 10 yards was cleared off the line by City captain Steph Houghton.

England international Dowie then raced on to an excellent pass from central defender Lucy Bronze to slide home the only goal of the game.

But before running out deserving winners, the home side had to thank Stout for a tremendous 81st-minute save from Duggan's angled drive.

Four days after knocking Bristol Academy out of the FA Cup, Chelsea completed a rapid double over their opponents.

Academy improved after the interval but it was still the visitors who looked the more likely scorers.

Ogimi hit the woodwork and had a header well saved by keeper Mary Earps, who also superbly kept out an Aluko effort.