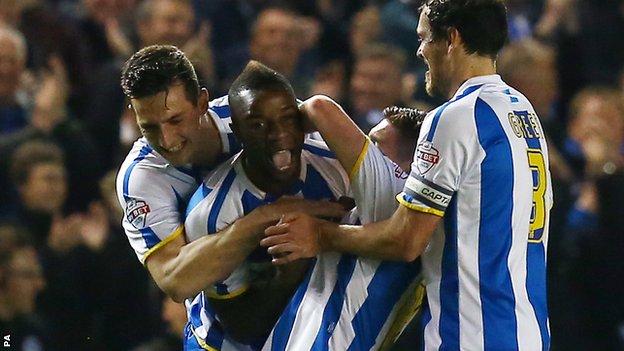 Goals from Kazenga LuaLua and Jesse Lingard lifted Brighton into the Championship play-off places and relegated Yeovil into League One.

LuaLua scored in the 77th minute when his left-wing cross eluded keeper Marek Stech and bounced into the net.

Lingard made sure of victory in the second minute of added time, sweeping home Solly March's cutback from the right side of the penalty area.

Albion had the better of the first half, although Yeovil came closest to opening the scoring when Ruben Palazuelos smashed a shot against the crossbar from 20 yards out in the 18th minute.

Andrea Orlandi had the best chance at the other end when his glancing header from Will Buckley's cross went wide of the right post on the half hour.

But almost immediately Brighton keeper Tomasz Kuszczak was forced to save down low to his left from a fierce angled drive from Sam Hoskins.

Joe Edwards had the best chance of the second half for Yeovil when his shot from the edge of the box grazed the top of the bar.

But, with 13 minutes left, the deadlock was broken when LuaLua crossed right-footed from the left and watched the ball bounce in front of keeper Stech, into the back of the net.

It was his first goal since the final day of last season when he scored twice to send Wolves down.

As the game moved into added time Brighton increased their advantage when on-loan Manchester United striker Lingard moved into the centre of the penalty area to connect sweetly with March's cross, his third league goal for the club.

"When you look in their eyes you can see how passionate they are and how supportive they've been.

"The reception we got from the Brighton fans as well was fantastic. They knew we'd given it a right go.