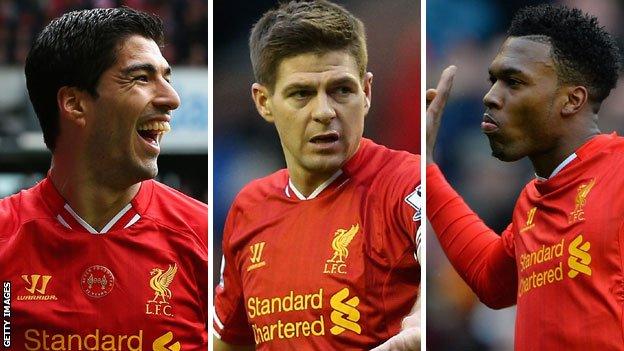 Liverpool trio Luis Suarez, Steven Gerrard and Daniel Sturridge have been nominated for the Professional Footballers' Association's player of the year award.

The winners will be announced at a ceremony at the Grosvenor House Hotel in London on Sunday, 27 April.

PFA player of the year winners

His strike partner Sturridge, 24, has scored 20 Premier League goals while captain Gerrard, 33, has contributed 13 goals and 11 assists for the free-scoring Reds.

Ivorian Toure, 30, is Manchester City's top league scorer with 18 goals from 31 appearances, while Chelsea manager Jose Mourinho acclaimed Hazard, 23, as "the best young player in the world" in February after the Blues' 1-0 win over City at Etihad Stadium.

Lallana, 25, has been the standout player for Southampton this season, and made his England debut against Chile in November.

His Saints team-mate Shaw, 18, made his international debut against Denmark last month and is vying with Chelsea's Ashley Cole and Leighton Baines of Everton for a place in England's World Cup squad.

Wales international Ramsey scored 13 goals for Arsenal before a thigh injury in December forced the 23-year-old out of action for three months. He returned to the Gunners side in their defeat by Everton on 6 April.