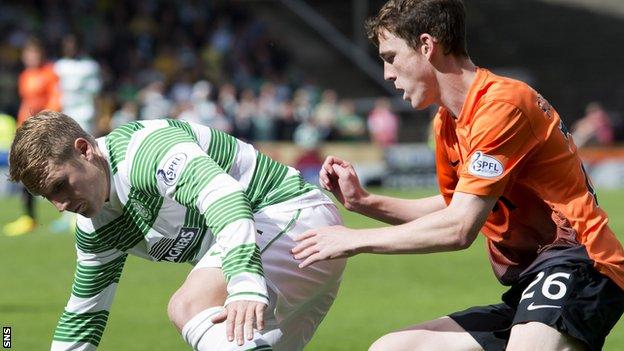 Dundee United have as many players as Celtic in the Scottish Premiership team of the year chosen by PFA Scotland members at senior clubs.

The final place in defence is taken by Inverness Caledonian Thistle's Graeme Shinnie.

Two other forwards are included in a 4-3-3 formation - St Johnstone's Stevie May and Kilmarnock's Kris Boyd.

Boyd and the Celtic trio make up the four nominations for the main PFA Scotland player of the year award, with Commons having become the bookmakers' favourite.

The young player award is being contested by May and three from Tannadice - Robertson, Armstrong and attacking midfielder Ryan Gauld.

Aberdeen manager Derek McInnes has expressed surprise that none of his squad received enough votes from fellow players across the Scottish Professional Football League to make either shortlist.

Third-top Motherwell are one of six sides not to be represented in the team of the year, the others being relegated Hearts, plus Hibernian, Partick Thistle, Ross County and St Mirren.

Scottish Premiership team of the year 2013-14