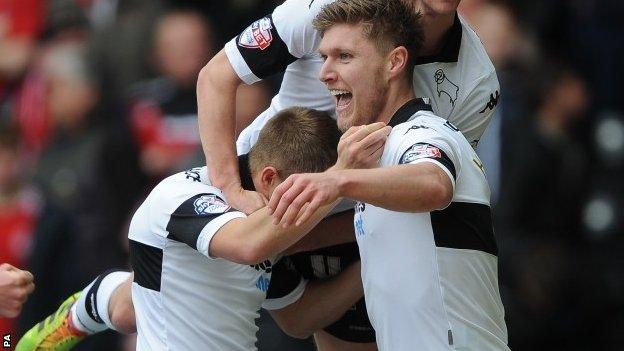 Derby scored three times in the second half against 10-man Watford to secure a fifth straight win and equal a club record points tally.

Watford led early on through Troy Deeney's cool finish as they chased the remote possibility of a play-off place.

But the first of two Jeff Hendrick goals levelled it before Craig Forsyth's drive put the Rams in front.

Marco Cassetti was sent off and after Mathias Ranegie had equalised, Hendrick and Chris Martin, late on, won it.

Deeney had given Watford the perfect start as he ran onto a pass from Cristian Battocchio to lift the ball over Lee Grant and claim his 23rd goal of the season.

But Derby replied with a clutch of chances and it was no surprise when Hendrick latched onto an attempted clearance from Daniel Pudil to slot the ball past Jonathan Bond from 12 yards.

Jamie Ward was then denied by Bond as the home side continued to dominate and with an hour gone they went ahead when Craig Bryson set up Forsyth to fire home.

Watford were then reduced to 10 men when Cassetti received a second yellow card, while results elsewhere also conspired to end their hopes of a top-six finish.

But the Hornets did equalise two minutes later when substitute Ikechi Anya crossed for Ranegie to head past Grant at the far post.

Both sides then had chances to go in front but it was Derby who grabbed the initiative again thanks to a stunning goal from Hendrick, who crashed a 25-yard shot past Bond.

Top scorer Martin then got in on the act as he slid the ball home from a tight angle for his 23rd goal of the season as Derby equalled the 84 points achieved by Billy Davies' promotion-winning side eight years ago.

"Credit to the players, they keep getting themselves out of a hole and getting the results but in terms of the way forward we certainly need to tighten up in a few areas.

"We scored four but we're not ruthless enough in that and it's ruthlessness at both ends that we need. If we make those kind of mistakes in the play-offs it will make our job very difficult.

"What we have tried to do is provide consistency, not just in results but in performance. That's what we need to get back to, making it difficult for opponents and not thinking we can just go out and outscore them."

"I have to say sorry to everyone, all the supporters that came here today. But sometimes football is like that, you have a good performance and then straight after you have this kind of performance.

"What is very disappointing for me is that we didn't show the right anger today to win this game.

"I am looking for a strong finish to have an assessment of which players can help us next season and to show a good commitment to the club and the supporters."