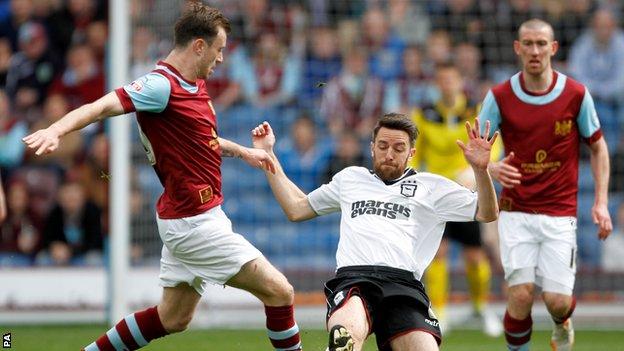 Realistically, only a victory would have preserved the slim promotion hopes of Mick McCarthy's side but this loss leaves them four points adrift of sixth place with one game remaining.

Chances were scarce for either side at Turf Moor.

But Burnley earned their 26th win of the term when Michael Kightly rolled in to an unguarded net after Dean Gerken had denied Danny Ings.

Given that their Premier League status for next season is confirmed and the title is now out of reach, Burnley might have been expected to allow their ferocious intensity to drop just a little.

But that would be to misunderstand the side Sean Dyche has assembled.

They were afforded two days off after clinching promotion with victory over Wigan on Easter Monday but the hosts' characteristic desire was not dimmed.

Kightly's goal, after 54 minutes, epitomised that.

Twice Burnley players won challenges in midfield before Ashley Barnes flicked the ball into the path of Ings. He veered past Luke Chambers and, although Gerken blocked his effort, Kightly was on hand to guide the loose ball into an unguarded net.

Until then, clear openings had been scarce for Burnley. Ings posed problems with a couple of efforts from the edge of the area, while Scott Arfield appeared to be impeded by Chambers as he strained to reach a Kightly cross.

Indeed, the better opportunities had fallen to Ipswich. Kieran Trippier was forced to divert a Tommy Smith header over his own crossbar and Frazer Richardson volleyed wide after meeting a teasing Daryl Murphy cross.

Yet for all Ipswich's endeavour to haul themselves back into the game, it was Burnley who came closest to scoring a second goal. Unsurprisingly Ings was involved, meeting Dean Marney's cross and cannoning an effort against the crossbar.

"I believe in the way the players work. My personal belief is that if you do it right all of the time, then you don't need to flick that switch and turn it on.

"Tremendous credit to our group as it is difficult with all [the celebrations] going on. The focus on the game was absolutely spot on.

"That is a good thing because there is some of this group that will be competing in the division next year where there will be a lot of stuff going round and different protocols - maybe it was a tiny taster of that here."

"I thought our performance was very good up until conceding the goal. We were on top, but we missed that one tackle and it changes the course of the game.

"Without doubt, Burnley are outstandingly good value. They have deserved it, well done to them, and they should enjoy it and not listen to all the doom and gloom."