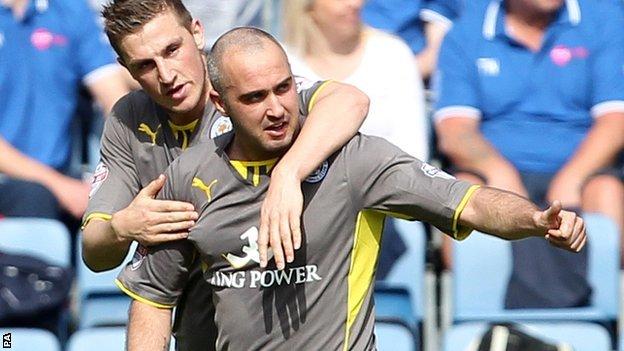 Leicester moved to within a point of the 100 mark in the Championship after a win at Huddersfield.

Former Huddersfield forward Gary Taylor-Fletcher gave the champions the lead when he curled in a shot off the left-hand post.

The home side went close when an Adam Hammill effort was cleared off the line but Leicester had the better chances of a low-key game.

Wes Morgan tapped in a Matty James cross to wrap up the win for the Foxes.

There was little riding on the match as Leicester had won the title at Bolton in midweek, while Huddersfield had secured Championship survival with a win at Yeovil last week.

James had been denied by the woodwork before he helped set up the opener.

He broke from deep and found Lloyd Dyer, who set up Taylor-Fletcher to finish the move with a stylish finish.

The home side should have levelled when Sean Scannell cut the ball back for the unmarked Hammill, whose tame shot was cleared off the line.

"We were all right box to box but in the final third we didn't do enough.

"Having said that we were playing the champions who look like a Premier League outfit now.

"They have done unbelievably well."

"The 100-point total has given the players something to focus on.

"All we can do is keep playing well and hopefully reach the 100 or 102-point mark.

"We have illustrated we have a really strong squad and are capable of still performing at this stage of the season."