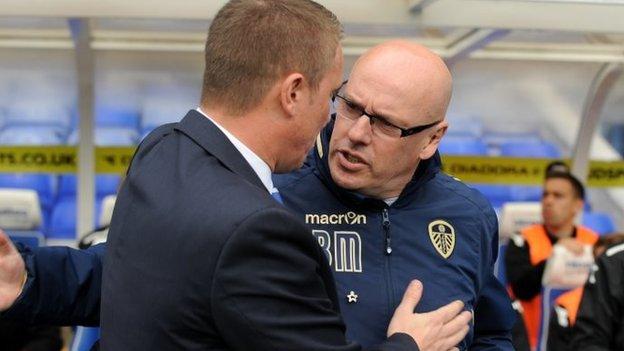 Towering striker Matt Smith guided in a neat header to put the Whites ahead.

The Yorkshire side, who won 4-0 in the reverse game, doubled their lead within two minutes when Danny Pugh rifled in.

Blackpool's 2-0 win at Wigan meant that Birmingham, who have a game in hand over most of their nearest rivals, dropped into the bottom three for the first time since October.

Leeds moved up to 15th with their third win in four matches.

The Blues had started positively, taking the attack to their visitors in the first half but Tom Adeyemi missed their best chance when he floated his shot over the bar with only the keeper to beat.

Despite having most of the play, Birmingham failed to create too many clear-cut chances and were punished after the break when Leeds swept into the lead with two goals in as many minutes through Smith and Pugh.

That demoralised the hosts who fell further behind when Caddis put past his own keeper before Macheda reduced the deficit with a powerful left-footed shot.

"It is hurting me and my family. It is affecting the enjoyment of living in a fantastic part of the world. It is not great, so I am prepared to do everything to keep us in the league. I know that I can do it.

"I believe that I have the backing of the players. A bit of nervous tension has crept in and we need to find a way of eradicating this in the last two games.

"Our poor home form is reality. I cannot affect the past but I can the future so why not go out with bang in our last home game against Wigan by winning?

"That would set us up for the last match of the season to give us an opportunity to stay in the league. We were energetic and powerful in the first half but to give away goals like we did you get punished."

Leeds United boss Brian McDermott on rumours that he is about to lose his job:

"These sort of things do not frustrate me or unsettle me. The most important thing is Leeds United and what is best for this football club and what is best to take this club forward. That is the only agenda I've got.

"The future is looking brighter as we have won three of our last four games. We were top five at one stage but we had a lot of things going on with the ownership, which was really difficult.

"These are mitigating circumstances and not excuses. We are now as safe as houses in this league and looking to do well next season."