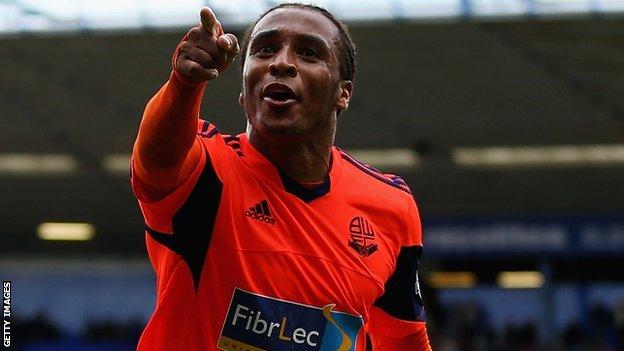 Bolton made it eight league away games without defeat as they comfortably beat Sheffield Wednesday.

The visitors raced into a three goal lead inside half an hour, with Neil Danns bundling in a Jermaine Beckford cross for the opener.

Lee Chung-yong pounced on a defensive mistake to race clear and add a second before Liam Trotter scored with a dipping long range effort.

Joe Mattock pulled one back for the Owls but they rarely carried a threat.

Wednesday have now won only one of their last seven games, although like Bolton they are safe from relegation with the play-offs well out of reach.

Both sides traded chances before Beckford did well to get to the byeline and put the ball across the face of goal, with Danns applying the finishing touch for the opener.

Lee added to the lead before the home side's Rhys McCabe had a firm low drive saved.

Trotter put Bolton further ahead before Mattock reduced the arrears with a fine strike, hammering the ball beyond keeper Adam Bogdan following a corner.

Bolton continued to look the more dangerous side and the Owls had keeper Chris Kirkland to thank for not suffering a bigger loss.

"It was very convincing. I felt that we had to make sure the first 20 minutes were done properly in terms of game plan and attitude because we were aware that Sheffield Wednesday would try to spring themselves into action.

"I felt that we were right on our game and deservedly went three goals up. We passed the ball very well from the back and through midfield.

"The hunger and desire was there as well. If anything, we probably should have scored more goals in the second half."

"It looks like we're going to need four goals to win any game at the moment because we're gifting goals with individual errors.

"Our quality on the ball should have been a lot better. If I was to evaluate the season, I'd say the first 18 games were very poor and from December onwards it was better.

"We've now got dragged back down to being very poor again, which is disappointing."