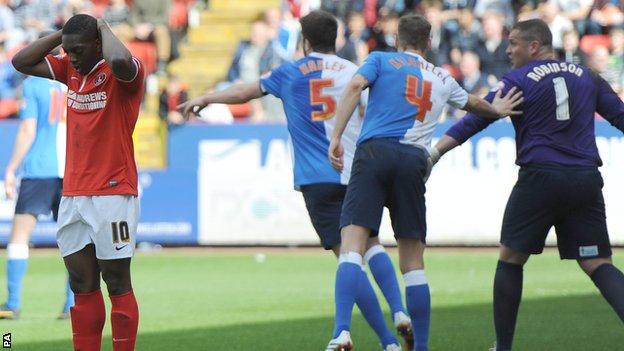 Charlton remain in relegation danger after crumbling against Blackburn Rovers at The Valley.

Rudy Gestede gave the visitors the lead and, after Marvin Sordell missed a penalty, the hosts were punished when Michael Keane made it 2-0.

Sordell pulled a goal back but Tom Cairney's effort quelled any fightback and maintained Blackburn's slim hopes of a play-off place.

Defeat leaves Charlton two points above the bottom three with a game in hand.

Jose Riga's side now host Watford on Tuesday knowing that victory will ensure they avoid any final-day drama.

However, anything else will mean next Saturday's trip to Blackpool will be a nervy encounter.

Blackburn are likely to endure a fraught afternoon, too. They must win at Wigan while making up a six-goal turnaround on the sixth-placed Latics and hope Brighton lose at Nottingham Forest.

Gary Bowyer's side will go into that game in good form.

Gestede's header from Joshua King's cross set the benchmark for a powerful performance, with King coming close to doubling the lead after Callum Harriott was caught in possession.

However, Sordell should have hauled Charlton level after winning a spot-kick just before the break, only for Paul Robinson to make a fine save.

The forward beat the former England goalkeeper with a curling shot from the edge of the box early in the second half but, by then, Blackburn had already scored their second when Keane rose to meet Craig Conway's free-kick

The victory was secured just after the hour when Cairney then restored Rovers' two-goal advantage after Jordan Rhodes's shot was blocked on the line by Dorian Dervite.

"I hope we will do the job in the next game and not wait for the next one, but the most important thing in our situation is to do what we have to do.

"I know my team now. What gives me confidence is what they have done in the past."

"It was the second to last game of last season that we stayed up. A year later we have half a chance of the play-offs, so we have made a bit of progress.

"A hell of a lot of hard work has gone into it and we have got to make sure we continue that.

"Then we have an important summer because the club as a whole has quite a bit to do still."