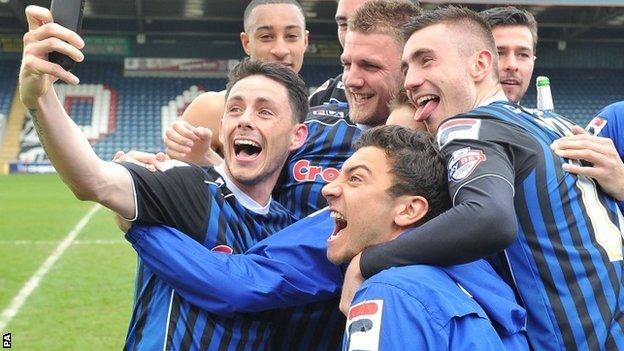 Rochdale secured promotion to League One with victory over Cheltenham.

The lead was doubled shortly after when Henderson slotted home from close range following good work from George Donnelly and Bastien Hery.

The Robins rarely threatened and the hosts ran out comfortable victors to ensure a return to League One after two seasons in the fourth tier.

"I'm pleased that we've given our place in League One back to the supporters.

"I'm not one for really big celebrations.

"I like to celebrate a little bit, I like to analyse and there's a great sense of feeling inside of emotional achievement."

"I thought mobility was a massive problem for us today in terms of desire, recovery runs and our willingness to stay with people wasn't anywhere near what it should have been and it cost us two goals.

"Joe Hanks got his chance today and showed that he's got ability. He's got a long way to go but we've given him a taste of it.

"We've had a mediocre season and we want one like Rochdale have had. We've got to try and put a plan of action into place to make that happen."