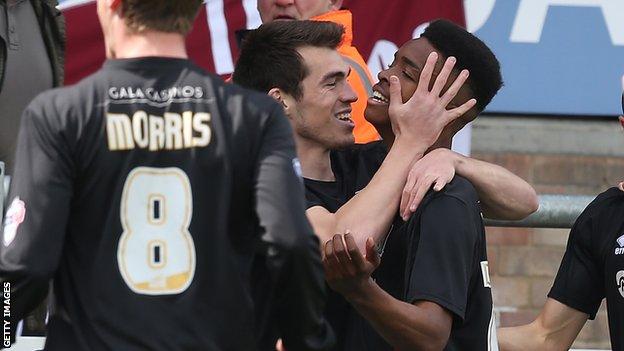 Teenager Ivan Toney scored his first ever senior goals to defeat Dagenham and pull Northampton Town out of the League Two relegation zone for the first time since September.

The 18-year-old headed in a cross from Ian Morris, who then scored one himself with a spectacular long-range effort.

Toney, making his second league start, then netted a stunning overhead kick with his back to goal.

Daggers had a Luke Norris header saved, but the Cobblers edged towards safety.

Visiting keeper Matt Duke also had to save from Medy Elito and at the other end Chris Hackett's free-kick was kept out by Jordan Seabright.

With Wycombe losing to fellow relegation rivals Bristol Rovers, Northampton boss Chris Wilder can now preserve his side's Football League status with a point from next week's visit of Oxford United, the club he opted to quit in January.

"We couldn't have asked for anything more. They were three quality goals and we've had fantastic support.

"Ivan Toney gave us a spark last week and he deserved to play, regardless of his age. Both he and John Marquis set us off on the front foot.

"We had to pick the right side and the right tactics today, and we've got the result. Now we have to do the same again next week."