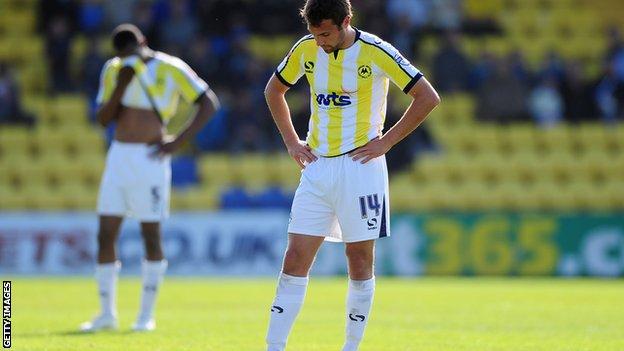 Torquay United were relegated from League Two despite a comfortable victory over 10-man Mansfield.

The Gulls took the lead when John Dempster put through his own net and that advantage was doubled through Ashley Yeoman's close-range effort.

Mansfield's Matt Rhead then saw red for a poor challenge on Dale Tonge before a James Jennings header pulled one back.

Yeoman missed a great chance to increase the lead before Shaquile Coulthirst's header sealed the win.

Despite securing their third successive away victory, Torquay end their five-season tenure in the Football League after Bristol Rovers and Northampton both won their respective matches.

Mansfield began the game positively and should have taken the lead through Ollie Palmer but his header from six yards went just wide.

The Gulls responded well and opened the scoring when Baily Cargill's driven cross from the left found the unfortunate Dempster, who could only turn the ball past his own keeper.

Rhead and Dempster both missed the target with headers as the Stags searched for an equaliser, but it was the visitors who struck again.

Courtney Cameron's cross was met by Yeoman and after his initial header was saved, he reacted quickest to fire the loose ball into the back of the net.

It got worse for Mansfield before the break when Rhead was sent off for a poor challenge but despite that the hosts got back in the game through Jennings' header shortly into the second half.

The visitors piled on the pressure but missed a host of chances to increase their lead until Coulthirst headed home substitute Jordan Chappell's centre.

"That stunk of an end of season performance.

"Some of the lads looked like they are already on their holidays, and I've just told some of them that they won't be coming back from their holidays.

"Since I've been at this club we have always worked hard and that's not been the case today.

"I think too many think they have arrived because they are Football League players. That's not me. We have to continue to work hard."