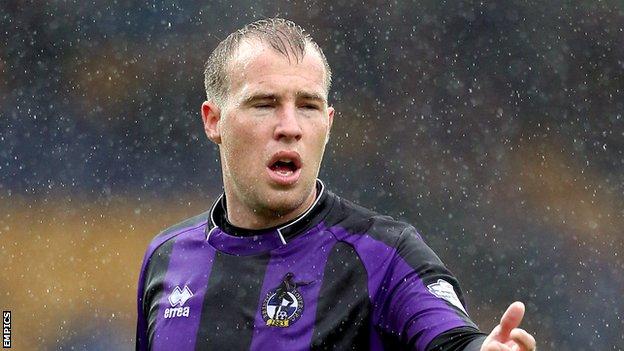 Lee Brown curled in a free-kick to put Rovers in front before Matt McClure's superb back-flicked volley made it 1-1.

McClure put a good chance wide and then was at fault at the other end, guiding a cross into the path of Clarkson, who finished from close range.

They will have to win at bottom side Torquay, who were relegated on Saturday, and hope that either Rovers or the Cobblers lose on the final day of the season.

Darrell Clarke's Pirates will need just a point at home to Mansfield to preserve their Football League status, while Northampton host Oxford.

"Everything's gone against us today. It's a bad situation. It's a really down atmosphere. But I've got to pick them up, I've got to turn this around and get a result at Torquay next week."

"I didn't think there were many chances. We had the majority, but as has been the case this season we struggled to stick the ball in the back of the net. We were on top. We were in control of the game.

"They only had one chance in the second half, I was happy with the way we were playing, just a little bit more quality around the box would have been better."

"We know there's still work to be done. Obviously we are delighted to have won this football game but we have still got a job to do at home.

"It's great to get three points and it stays in our hands until our final home game but nothing is done yet. I don't want people to be carried away to think it is.

"I know that we'll have a full Memorial Ground on Saturday but there is still plenty of work to do."