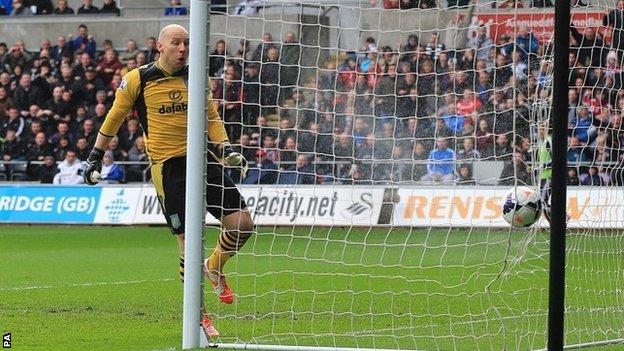 Jonjo Shelvey scored a wonder goal as Swansea all but guaranteed their Premier League status and left Aston Villa in danger of relegation.

Pablo Hernandez curled in a third before Bony scored his second with an injury-time penalty.

The result leaves Villa just four points above the relegation zone with three games to go.

Swansea's first back-to-back wins in the Premier League since December 2012 means they are 12th in the table, eight points clear of the bottom three.

Whilst Garry Monk's men can potentially be caught by teams in the relegation zone, their goal difference - the best in the bottom half - is effectively worth an extra point.

Their impressive victory at a wet and windy Liberty Stadium means Paul Lambert's visitors are far from safe.

The nature of their loss and poor run of form will be a cause for concern for the club.

They have now lost five of their last six matches. Two of their three remaining fixtures are away at Manchester City and Tottenham.

Villa were behind early on when Shelvey's superb long pass put Bony clear and the Ivory Coast striker slotted the ball past the advancing Guzan.

The visitors pressed in a bid to get back into the game, crossing the ball into the box at every opportunity.

Karim El Ahmadi put Albrighton into space out wide and the winger's cross was smashed into the net from inside the six yard area by Agbonlahor.

It was the England international's first goal since the New Year's Day win at Sunderland.

Villa's revival was short lived and less than four minutes later Ron Vlaar's poor clearance fell straight to Shelvey on the edge of the centre circle, just inside the Villa half.

The Swansea midfielder controlled the ball before volleying a dipping shot over Guzan into the top corner of the goal.

The strike seemed to take the momentum away from Villa as Swansea finished the half strongly.

Villa pressed after the break but created little of note to threaten Michel Vorm's goal.

Shelvey's low shot from just outside the area was tipped around the post by Guzan as Swansea pushed forward.

The killer blow was finally delivered by Hernandez. Shelvey's cross found the Spaniard in space inside the area and the former Valencia winger curled the ball high into the corner of the net.

Late on Villa defender Nathan Baker was judged to have fouled Marvin Emnes inside the area whilst challenging for a ball in the air.

Bony fired home from the spot to send Swansea fans home happy while Villa were booed off the pitch by their travelling supporters.