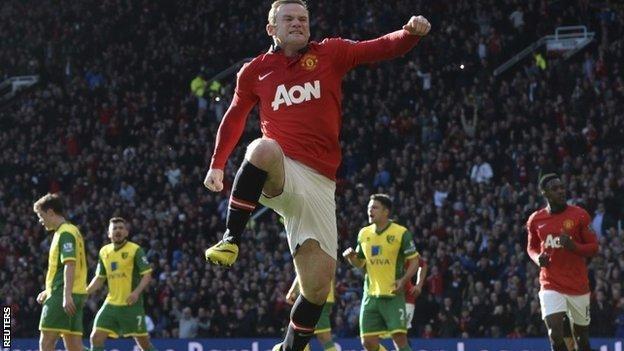 Giggs, in temporary charge after the sacking of David Moyes, watched Rooney score a penalty and curling effort either side of half-time.

Substitute Mata added a third and headed in from six yards to keep United in the hunt for a Europa League spot.

The Canaries arrived in Manchester at the end of a week in which United underwent a second managerial change in 10 months, with Giggs - the club's most decorated player - asked to take charge by United's vice chairman Ed Woodward.

The 40-year-old promised a return to the traditional Manchester United style of play ahead of kick off, with "passion, speed, tempo, bravery and imagination," to the fore.

A rapturous welcome greeted him as he emerged from the tunnel and with 962 appearances for the club, Giggs wrote United is "the rock his life had been built upon" in his programme notes.

A 'good luck' card from United mascot 'Fred the Red' was also on offer for the Welshman and after a tepid opening half an hour, his side cruised to just an eighth home win of the campaign.

Another match, another plane

United have now claimed 47 of their 60 points against sides in the bottom half this season and despite Norwich goalkeeper John Ruddy smartly saving from Danny Welbeck and Antonio Valencia, Neil Adams' side could not kill the feel-good factor at Old Trafford.

The England striker - United's talisman without the injured Robin van Persie - sent Ruddy the wrong way from the spot after Steven Whittaker had clumsily tangled with Welbeck.

Then, when the teams re-emerged from the interval, his 17th league goal of the season arrived as he fired in off the post from 25 yards despite slipping when shooting right footed.

Welbeck - one of six changes made by Giggs from the 2-0 defeat at Everton - drilled a smart half volley forcing Ruddy to again save, but Mata replaced him from the bench to end the contest.

The record signing - made by Moyes - volleyed in Phil Jones's cross six yards out, seconds after Rooney had been denied a hat-trick by another Ruddy save.

Playing in a central role, the Spaniard again found himself in the box to touch home Valencia's cross-shot for his fifth United goal after good work down the left by Patrice Evra.

Norwich, for all their early bravery at the back, had capitulated, but went close to a consolation when substitute Johan Elmander fired wide and Martin Olsson's deflected effort crashed against the crossbar.

The Canaries face Arsenal and Chelsea in their run-in and will be in the bottom three on Sunday afternoon if there is a winner in the midday kick-off between Sunderland and Cardiff.

United, who should have added a fifth when Javier Hernandez missed a one-on-one opportunity in injury time, sit six points behind sixth-placed Tottenham.

"I think we did really well in the first half and frustrated them but then five minutes before the break they get a penalty. There is minimal contact and that changes the game.

"In the second half we were not good enough. We allowed Wayne Rooney too much time and space to get in a shot and we did the same last week against Liverpool when Raheem Sterling scored.

"We had a go after that but it is difficult when you are 2-0 down away from home. I felt we should have done better. We have got two games left and probably have to take points from them.

"Overall, it wasn't good enough but we are still above the [relegation] line. What we can't do is beat ourselves up."