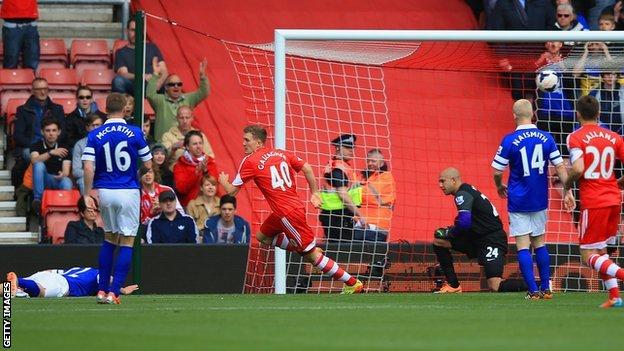 The Toffees, already a point adrift of Arsenal in the race for fourth place, were behind after 54 seconds when Antolin Alcaraz headed home Rickie Lambert's awkward left-wing cross.

And with Saints on top, Seamus Coleman headed another own goal to make it 2-0.

Southampton's tally of 52 points means they have equalled their best points haul in a 38-game Premier League season and still have two games to play.

Everton, meanwhile, have already set their Premier League best - with 69.

The visitors improved after half-time but could not find a breakthrough.

Romelu Lukaku wasted a good headed opportunity and the visitors had two decent shouts for a penalty turned down.

But the Merseyside club, who could be four points off the top four if Arsenal beat Newcastle on Monday, were a poor imitation of the side that so impressed in beating the Gunners and Manchester United in recent weeks.

They lacked their usual intensity and quality and looked vulnerable at the back throughout.

Only a win over a mid-table Saints team with little to play for seemed like keeping alive their Champions League hopes, but victory at St Mary's never seemed on the cards with a nervy defensive display that started badly and got worse.

Alcaraz, who was deputising for the injured Sylvain Distin, was slightly unfortunate to gift the hosts the lead inside a minute as he tried to divert Lambert's cross around the post for a corner.

The visitors never recovered from that setback and struggled to get to grips with the movement and quality of England duo Lambert and Adam Lallana, as well as Sam Gallagher, who was making just his second Premier League start.

Steven Davis should have added a second but his well-struck first-time effort went narrowly wide after great work by Lambert.

Coleman did make it 2-0 when Nathaniel Clyne's right-wing cross went over both John Stones and Alcaraz and the full-back neatly cushioned a header down and into the bottom corner.

The Toffees' only noteworthy first-half chance saw Lukaku blaze a shot over but they posed more of a threat in the second half.

"Two own goals gifted the home side their advantage. Everton had a couple of strong penalty shouts after the break but were poor in the first half and there is no denying Southampton were worthy winners. This is a huge dent for Everton's Champions League hopes."

They felt aggrieved by a tight offside call on their brightest player Gerard Deulofeu and a caution for substitute Leon Osman for diving in the box when he appeared to have been clipped by Lovren.

Lukaku also headed straight at goalkeeper Artur Boruc from close range as the game opened up but Saints created the best chances in the last 15 minutes and Lambert almost wrapped up victory with a fine low free-kick that hit the outside of the post.

"There were many positives aspects from the win today. In the overall analysis, we just followed our style. We played in the way we know how to play and it worked for us to play a team that is fighting to get into the Champions League as well.

"I want to thank the players, the medical staff and overall the entire club because we matched our record in the history of the Premier League."

"It's very rare to see two own goals. To concede one so early affected us a little bit and we got a bit frustrated. We were not our normal selves.

"In a back five you need consistency and having changes we needed 20-25 minutes to get into a tempo and unfortunately we conceded two goals.

"We got stronger in the second half but we never had that confidence we normally have to get the goal to get back into the game.

"Everything that could have gone wrong defensively did. But eight wins out of 10 is a phenomenal return. You can't underestimate the run the team has been on.

"We always look at the biggest points tally we can get. Today is a setback but we will learn from it and we will be ready for next Saturday."