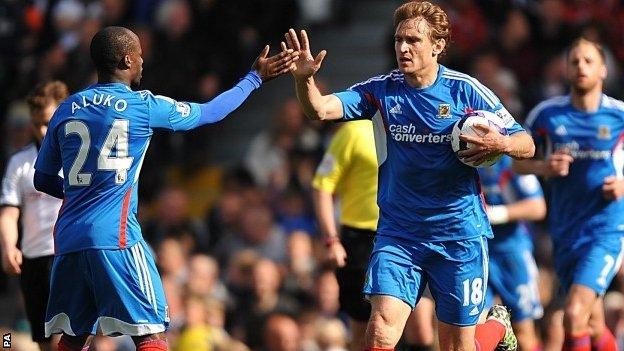 Fulham led through a curling shot from Ashkan Dejagah and Fernando Amorebieta's headed first goal for the club early in the second half.

At that point they were heading out of the relegation places with Hull still in danger.

But Hull hit back as Nikica Jelavic nodded in and Shane Long then headed a dramatic late equaliser.

It was a superb comeback from the FA Cup finalists, who had barely been seen as an attacking force until going two behind.

But a stroke of luck for Jelavic's goal turned the tide as Hull exposed Fulham nerves to edge nearer to Premier League safety.

Fulham's players looked very dejected at the end. But it's not over for them. They can still win their last two games."

Despite their perilous position, Fulham had lacked the necessary urgency to take control in a first half virtually bereft of chances.

The sole opportunity fell for Hugo Rodallega. The Colombian had scored the decisive goal in each of Fulham's last two wins but this time he was unable to get enough of a touch on Amorebieta's teasing left-wing cross.

Hull, who put six past Fulham at the KC Stadium just after Christmas, never over-committed going forward but could have had a penalty when Long burst into the box where he was bundled to the ground by Amorebieta.

Magath's response to a tepid opening 45 minutes was to make two changes at the start of the second half with Dejagah and Kieran Richardson replacing Lewis Holtby and John Arne Riise.

And it was Dejagah who broke the deadlock with his sixth goal of the season.

A tackle by Alex Bruce on Rodallega saw the ball break for Dejagah, who moved into the penalty area and worked the ball onto his left foot to curl a superb shot across a motionless Steve Harper into the top corner.

It was difficult to see Hull getting back into the game but when an attempted clearance from Fulham defender Sascha Riether hit his own crossbar via a touch from goalkeeper David Stockdale, Jelavic stooped to head in the rebound.

Sone Aluko hit the bar from long range and Ahmed Elmohamady shot against a post as Hull looked to expose the worst defence in the division.

And their persistence paid off three minutes from time when Aluko crossed for Long to head home his fourth goal since his January signing.

Magath was left with his head in his hands and Fulham's fate will be settled by a trip to Stoke and a final home game against Crystal Palace.

"It's not the result we wanted so we are disappointed. We were leading 2-0 so it seems we would get the three points but unfortunately we scored what was almost an own goal.

"After getting a goal they had some pressure and we took only one point.

"Besides the two goals we scored, we had two or three great chances to score again but we didn't manage it.

"We have lost two points we so have to win the next two games. We can do it."

"In the second half they went for it with four up top and suddenly we were 2-0 down.

"But as usual we responded in the right way. It's not often you come back from 2-0 down but if anyone will it's this lot. We showed great resilience to get something out of it.

"We might be safe tomorrow when we look at those games.

"But it's been a fantastic season, to be 13th in the division with three games to go and have a cup final to look forward to."