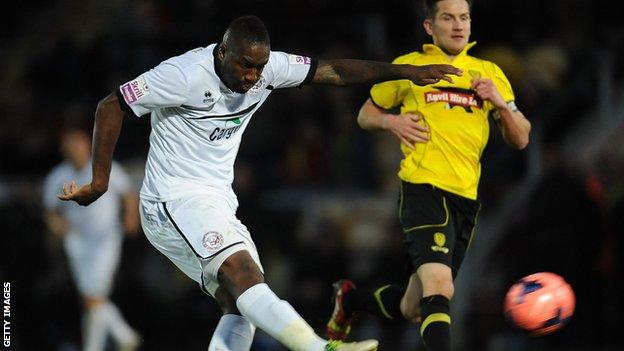 Hereford secured their Conference Premier status with a dramatic late win over Aldershot.

Sam Smith opened the scoring for the Bulls when he latched on to Luke Graham's header to slot home.

The Shots levelled through Manny Oyeleke's driven effort from the edge of the penalty area.

But Michael Rankine met a Dan Walker cross to take all three points and confine Chester, who were held at home by Salisbury, to relegation.

Hereford, who were set for their second relegation in three seasons with just two minutes remaining, survived on goal difference.

Aldershot also survive on goal difference, finishing the season just one place above the Bulls but level on points.

"Disappointed we didn't win the game and I felt we didn't play well and we looked physically and mentally drained, but that's understandable after the last five weeks.

"It's been a massive rollercoaster this season and we've been under severe pressure over the last five weeks and come through with some fantastic results. To stay up was the main aim.

"We now know that progression is the key and how quickly we do that depends on the summer and the players we try to bring in. We need the feel good factor of the last few weeks we've had and we can make it a bigger go next season."

"To hear the fans, it just shows that this club can't go.

"It's massive for the town and it's so big to these supporters. There are so many hard core supporters.

"It's been a very bad season, on and off the pitch, but hopefully, at least for 24 hours, we've got something to celebrate."