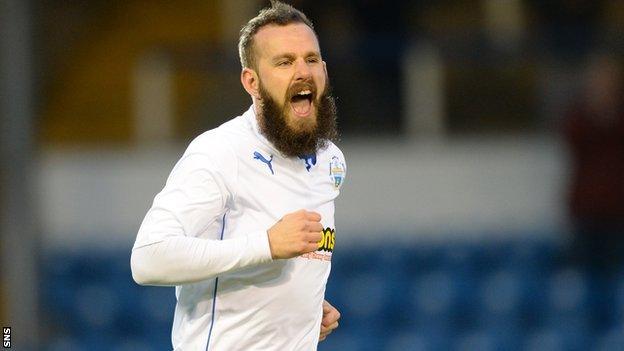 Falkirk's Championship title chances are hanging by a thread after dropping points against relegated Morton.

Conor McGrandles' sixth goal of the season capped a well-crafted move to give the visitors the lead.

But Morton equalised when Rowan Vine was on hand to finish from four yards following Barrie McKay's low cross.

Both sides had great chances to snatch the win, with Falkirk's Craig Sibbald hitting the post and Scott Shepherd denied by Morton keeper Nicolas Caraux.

However, two points dropped means the third-placed Bairns are now three behind leaders Dundee with one game to play. Falkirk need other results and goal difference to go their way next weekend if they are to end up champions.

Morton made an uncertain start as a combination of a few dodgy pass-backs and hesitant clearances by Caraux almost allowed Falkirk's Rory Loy in.

When Darren Cole was dispossessed in the box at the other end, Blair Alston looked odds-on to score but side-footed wide from 12 yards to the frustration of Falkirk fans behind the goal.

But they were celebrating shortly after; McGrandles tucking home his sixth of the season after a lovely flick-on by Mark Beck and an unselfish square pass by Rory Loy.

Morton put a spanner in the works on the hour-mark. McKay did well to scamper down the left and put in a low cross which neither Stephen Kingsley nor David McCracken could deal with, leaving Vine to smash it in.

The win could still have gone to the visitors, had Sibbald's shot from the angle not rebounded off Caraux's upright.

And substitute Scott Shepherd watched as his low, injury-time effort was clutched by a grateful Caraux just before it trundled over the line.