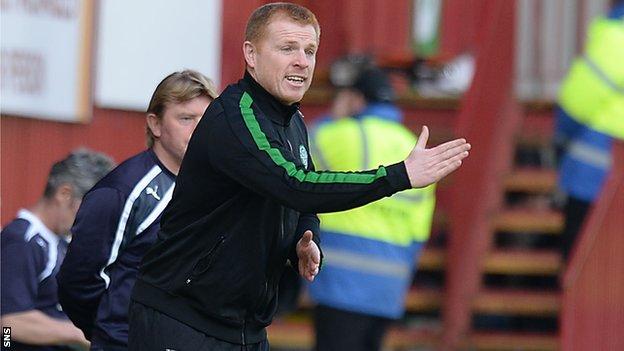 Celtic manager Neil Lennon suggested Celtic were unrecognisable as they drew 3-3 at Fir Park with Motherwell.

John Sutton's injury-time goal denied Celtic the win, but they trailed by two before Anthony Stokes struck before half-time.

"In the first half, we looked like some of the players were on holiday already," said Lennon.

Motherwell had failed to score against the champions in three previous meetings this season, with the Glasgow side shipping just 16 goals in their previous 33 Scottish Premiership games.

It was the first time Celtic had conceded three goals in the league since a 3-1 defeat at the same ground in last season's top six.

"I thought defensively in the first-half we were very poor," the Celtic manager told BBC Radio Scotland. "We gifted Motherwell two goals.

"I wasn't happy and sent them out early. We were going through the motions and that's not what I expect from the team even though psychologically the league's won.

"We have an obligation to the supporters who are here and I thought I got the exact response I was looking for.

"The first goal's poor, a straight ball over the top, no cover, and I think Fraser Forster should save it. The second we've missed the flight of the ball at a cross and not defended that properly.

"We gifted them two goals really, Motherwell didn't really have to work for them. Second-half was more like us, a lot better. Great attacking intent and good quality and good goals as well.

"We could easily have gone in at 2-2. The keeper's made a great save - no criticism of Kris Commons it's a great hit and a great save - and then second-half was just total Celtic domination and they've scored with one attack.

"Our second-half performance was excellent, we should have won the game. Then we switched off last minute.

"I can take a lot out of the second-half performance. We totally dominated and, on the counter attack with better care in the final finish, we'd have won the game comfortably."