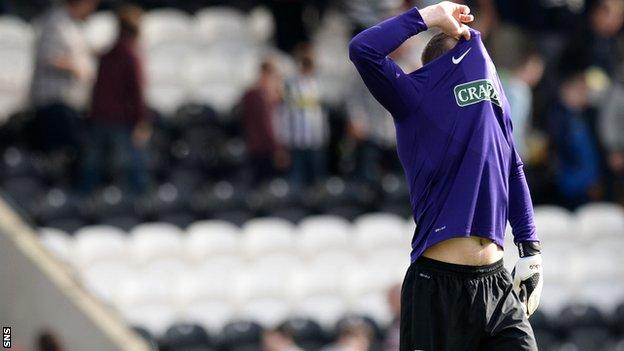 Terry Butcher vowed to do the Hibernian fans proud when they face Edinburgh rivals Hearts following a 2-0 defeat by St Mirren.

They were caught cold after only 12 seconds through Kenny McLean then Paul McGowan added a second.

Jim Goodwin was given a straight red card for the hosts, but Hibs could not take advantage.

"We've got to get a bit of pride back in our performance, our attitude and how we go about our work," said Butcher.

The defeat at St Mirren Park plunged the Leith men deeper into the battle to avoid a relegation play-off spot and a failure to pick up all three points in next Sunday's Edinburgh derby at Easter Road would increase the pressure.

"We had a great support through," Butcher told BBC Radio Scotland. "We had a good opportunity when they were down to 10 men and we failed to take advantage of that. But, to be honest, I'm lost for words really.

"We work all week on the way we want to play. We work on a shape and a system and then we concede a goal after 13 seconds. All that work during the week is gone in 13 seconds.

"And then we've tried to get back into the game, no panic, no pressure let's get on with it. Sometimes maybe it's a good thing if you lose an early goal because it takes away the threat of conceding because you have conceded - and then we lose a second goal.

"So you're 2-0 down and facing a mountain to climb really.

"The sending off. Although it didn't help St Mirren, it certainly galvanised them and made them defend a two-goal lead very resolutely, but we've had enough pressure and enough chances to put decent balls in the box.

"We pushed four men forward. We haven't scored a goal for a long while, it's a fifth straight defeat, and we have to look at the derby next week and pick a team that's going to compete and do Hibs proud, but at this moment in time we'll have to find one."