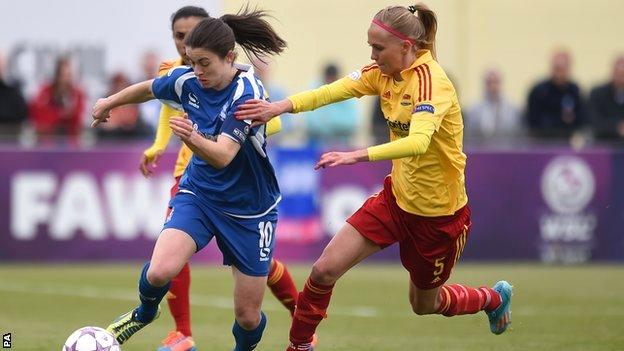 Birmingham City could still become the second British club to reach the Women's Champions League final after a battling goalless draw in their semi-final first leg at home to Tyreso.

The second leg takes place in Sweden on Sunday, 27 April.

In front of a 1,580 crowd at Damson Park, the Blues were on the back foot for long spells but ended strongly.

Matching Arsenal's feat of winning the European title in 2007 is still a long way off, but manager David Parker said: "I'm confident that we'll get a goal over there, and if we defend as well as we did today we can beat this team."

Parker added: "We started poorly and had to address that, but then we really grew into the game. I felt we were the better side in the second half and we could well have got a goal. That was a magnificent performance."

Although Parker's team defended well they were also guilty of some mistakes that could have proved costly in the opening half-hour.

Central defender Kerys Harrop's dallying on the ball was almost punished by Marta, before midfielder Jo Potter lost possession and Veronica Boquete fired an 18-yard effort into the side-netting.

And on the half-hour it took a tremendous block by central defender Aoife Mannion to prevent striker Christen Press' 12-yard shot from finding the net.

Blues improved after the break, and although goalkeeper Rebecca Spencer had to make a great diving save from Marta's 63rd-minute 30-yard free-kick, the home side looked the more likely to score in the closing stages.

Captain Karen Carney said: "We didn't have enough belief today, but after that second half performance we know we can go to Sweden and win."