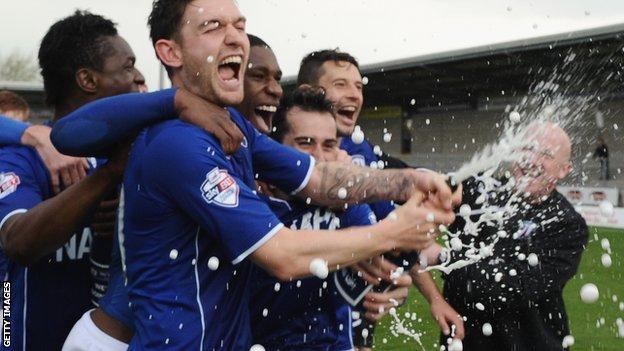 Chesterfield sealed promotion to League One with victory at a soggy Burton thanks to Jay O'Shea's double.

O'Shea turned home from inside the box seven minutes into the second half from a pass by veteran Ritchie Humphreys.

Sam Hird headed against the bar for the visitors and Gary Roberts curled a free-kick just over, while Lee Bell's tame drive was as close as Burton came.

Chesterfield's win takes them back to top spot in League Two, above title rivals Rochdale on goal difference.

Barring Rochdale winning by a cricket score at Newport next Saturday, Chesterfield will lift the title if they win at home to Fleetwood.

Burton, who have already secured their play-off place, remain fifth.

"They showed that little bit of extra quality than us. That maybe has been the difference between us getting automatic promotion instead of the likes of Chesterfield.

"I was disappointed with the players. I said: 'Listen, if you think that's enough then you're sadly mistaken because one or two of you looked terrible today'.

"They just didn't look like they had anywhere near enough energy or athleticism. That maybe has altered my thinking for one or two of the play-off games and it'll be their own fault for that."