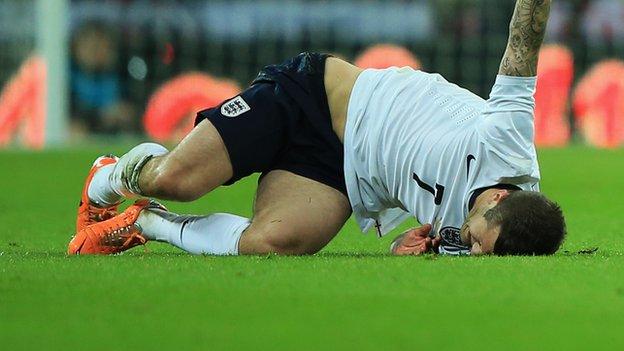 Arsenal manager Arsene Wenger has told England boss Roy Hodgson that Jack Wilshere will be fit for the World Cup, which starts on 12 June.

Wilshere, 22, has been sidelined since suffering a hairline fracture in his foot playing for England on 5 March.

Hodgson names a provisional 30-man World Cup squad on 13 May and Wenger said: "I told him that Wilshere will be available. He will be just polished.

England have Italy and Uruguay in the group and they have to get out of it. Jack can be the positive surprise

"He is starting to jog this week. I would think two to three weeks."

That recovery period would also put Wilshere in contention for the FA Cup final on 17 May, when Arsenal face Hull.

The midfielder became Arsenal's youngest league debutant when he came on as a substitute against Blackburn in September 2008 but has had some serious injuries since.

He sustained a stress fracture of his right ankle that ruled him out for 17 months and forced him to miss Euro 2012.

Last term Wilshere had further ankle problems and needed surgery at the end of the campaign, which caused him to miss England's close-season friendlies against the Republic of Ireland and Brazil.

"Jack has been in and out this year, but I think they have sorted out the problem now," Wenger said. "I hope from now on he will always be available."

"England have a very difficult group. They have Italy and Uruguay in the group and they have to get out of it. Jack can be the positive surprise."