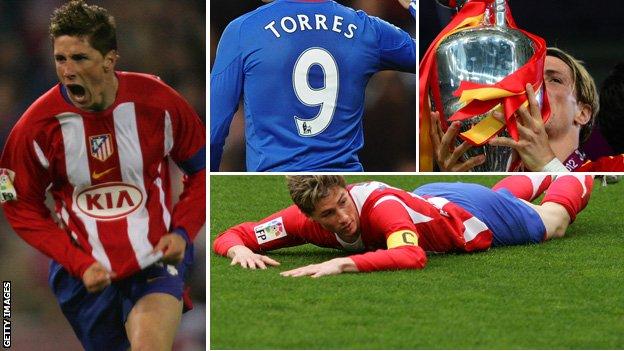 Suggesting that Fernando Torres was once a firm fans' favourite at Atletico Madrid is something of an understatement.

The Chelsea striker will be hoping to help fire his side into the Champions League final by defeating the club where he made his name before joining Liverpool in a £25m move nearly seven years ago.

And when the now 30-year-old first steps onto the Vicente Calderon turf to limber up for Tuesday's first leg, Torres is sure to be granted a warm reception from the supporters who once idolised him.

When I asked a selection of Atletico fans for a snapshot of what Torres meant to them, their answers were emphatic and effusive: "hero", "icon" and, most poetically, "a shining candle in a sea of darkness".

The ups and downs of Torres

2002: Scores six goals in 36 games as Atletico are promoted to La Liga

2007: Joins Liverpool for £20m and scores 29 goals in his first season at Anfield

2011: Joins Chelsea for a Premier League record fee of £50m. Only scores one goal from 18 games in first season at Stamford Bridge

2012: Scores a last-minute goal against Barcelona at the Nou Camp to seal Chelsea's place in the Champions League final, in which the Blues beat Bayern Munich

2014: Jose Mourinho says he is "unhappy" with his striking options at Chelsea

If that all sounds a bit over the top, it's important to understand the context of Torres's rapid rise from much-hyped wonderkid to global superstar.

It came at an otherwise depressing time in Atletico's history. They were playing in the Segunda Division, having been relegated only four years after winning the La Liga and Copa del Rey double in 1996.

Just to rub it in a bit more, Real's attack was being brilliantly led by the ultimate local-boy-made-good, Raul, who had progressed through Atletico's youth ranks before moving to the Bernabeu as a teenager, leaving Atletico fans to reflect upon what might have been.

Amidst the Rojiblancos' gloom, the heralded rise of a young striker called Fernando Torres suddenly gave them rare cause for optimism.

Long before his first-team debut, most Atletico followers were aware that Torres had grown up as a devoted fan before joining the club at the age of 11 and signing his first professional contract four years later.

Thanks to his exploits at youth level, those Atletico fans eagerly looked forward to the time when he would be old enough to shine for the first team.

He even gained international recognition by claiming the player-of-the-tournament award after firing Spain to the European Under-16 Championship title in 2001, scoring the winner from the penalty spot in the final against France.

That tournament took place in England and concluded in early May, with the final staged at Sunderland's Stadium of Light after a host team including Glen Johnson, Justin Hoyte and Craig Westcarr had been knocked out in the semi-final by France.

With a few weeks still remaining before the end of the domestic campaign, Torres's success created a growing clamour from Atletico fans for their young sensation to immediately receive his senior debut.

They got their way and Torres, still only 17, made a handful of appearances as Atletico narrowly missed out on promotion.

From the start of the following campaign he was a regular pick, however, further enhancing his burgeoning reputation by helping his side cruise to the Segunda Division title, ending their two-year exodus from the top flight.

Although Torres only scored six goals during that promotion-winning season, his energetic, determined style of play and obvious allegiance to the Atletico cause further endeared him to the fans, who had by then nicknamed him 'El Nino' - The Kid.

The rest is history. Torres quickly became one of the most potent goalscorers in La Liga, earning his first international cap and being appointed Atletico's captain at the age of just 19. The kid had grown up fast.

After a goal-laden few years the disappointment felt by Atletico fans at Torres's eventual departure to Liverpool was eased by the fact that he was followed by a veritable who's who of fabulous forwards: Diego Forlan, Sergio Aguero, Radamel Falcao and now the current front pairing of Diego Costa and David Villa.

And although the powerful Costa, who has scored 35 goals in all competitions this season, will probably soon become the latest in a long line of Atletico strikers to secure lucrative moves elsewhere, there could well be a significant consolation prize for the Rojiblancos.

The club most heavily linked with Costa's signature has been Chelsea - not least due to the fact that the striker's agent, the highly influential Jorge Mendes, also represents Blues boss Jose Mourinho.

With Torres seemingly not rated particularly highly by Mourinho, it would be no surprise if he was allowed to return to the Vicente Calderon in part-exchange for Costa during the summer transfer window.

Adding further fuel to that rumour, Atletico manager Diego Simeone - who played alongside the youthful Torres during his second playing spell with the club between 2003 and 2005 - recently said he had exchanged messages with his former team-mate.

The widespread view that Torres is now in decline will certainly not bother Simeone, who has excelled in consistently extracting the highest possible level of performance out of an unheralded squad.

Rather than regarding Torres's diminishing status as a problem, Simeone would relish it as an opportunity for the striker to prove his growing number of doubters wrong.

Before long, then, a reunion could be on the cards, and the sight of Torres back at the Vicente Calderon might not just be restricted to Tuesday.

If that happens, a hero's welcome is guaranteed.