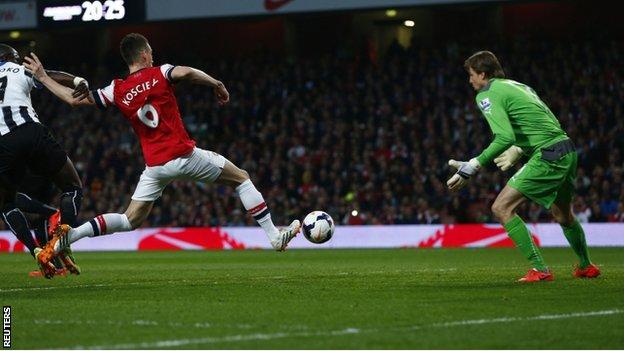 Arsenal are on the brink of securing Champions League football for next season after strolling to a resounding victory over a sorry Newcastle side.

Mesut Ozil tapped in to double their lead before half-time.

After the break, the German crossed for Olivier Giroud to head in the third and seal Newcastle's sixth consecutive Premier League defeat.

The season cannot end soon enough for Newcastle and their fans, who have watched a Champions League challenge evaporate in a dismal 2014, during which they have scored fewer goals - 10 - than any team in the division.

Arsenal, in contrast, are on the rise, having responded to their defeat by Everton on 6 April by winning their next three games to climb four points ahead of the Toffees with two games remaining.

"Newcastle were in damage-limitation mode and they never really came out of that. Apart from Yoan Gouffran's one-on-one they never got anywhere near Arsenal.

"I've been quite taken by the reaction of the fans here, there is a really good feel-good factor at Arsenal."

The Gunners, who have spent more days on top of the table this season than any other side, offered a tantalising glimpse of what might have been had Ozil and Aaron Ramsey not been injured for such a crucial phase of the season.

What must have been particularly galling for Newcastle manager Alan Pardew, returning to the dugout for the first time since his seven-match touchline ban for headbutting Hull's David Meyler, was how quickly his team unravelled after frustrating Arsenal for the first 25 minutes.

The home crowd were just starting to voice their frustration at the Gunners' lack of cutting edge when they took the lead from a set-piece.

Cazorla's ball from deep was floated into a dangerous area over the Magpies' backline and Koscielny shrugged off Moussa Sissoko to meet it on the bounce and poke past Tim Krul.

The second goal arrived three minutes before the break when Giroud sprung the Newcastle offside trap to race on to a Mikel Arteta pass. Twice his shots were blocked by Krul, but the loose ball rolled across goal to present Ozil - who may have been marginally offside - with a simple finish.

Pardew's men, with their travelling support voicing their displeasure at owner Mike Ashley, finally created a chance in the 57th minute from a brisk counter-attack.

Loic Remy, making his first start since 1 March, controlled the ball and flicked it through to Yoan Gouffran, who outpaced Nacho Monreal but could not find a way past Wojciech Szczesny from a tight angle.

Arsenal were not on the back foot for long, and soon the victory was secure.

The outstanding Ramsey played Ozil into space on the left and his cross was expertly headed home by Giroud at the near post.

Lukas Podolski went close again when his side-footed shot fizzed past the upright before, at the other end, Paul Dummett's effort flew horribly wide to sum up a miserable night for the Magpies.

"We had a slow and cautious start and progressively became stronger. After 20 minutes it was a good performance.

"Mesut Ozil is getting stronger in every game now. He is refreshed. Over Christmas he suffered physically. Now he looks physically sharp.

"The first season is always adaptation in the Premier League. But he has fantastic technique and passing. His assists and passes in the final third are excellent. We want some more goals from him - but that will come.

"We have come through a difficult period but the spirit in the side is healthy and strong and you see that when a team can bounce back after a big disappointment."