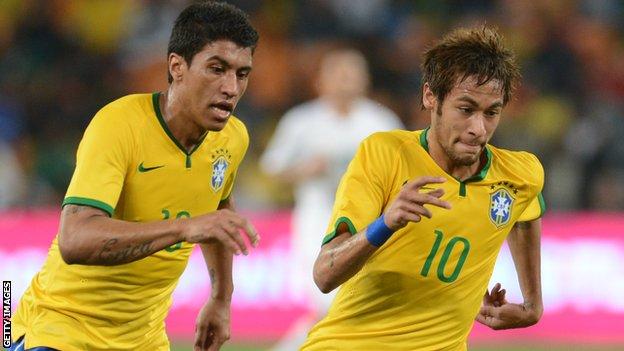 Brazilian duo Neymar and Paulinho have failed to convince the critics in their debut season in the European big time. But their national team coach seems unconcerned.

Club form cannot be completely discounted. Fernandinho, for example, has had a splendid season sharing the Manchester City midfield with Yaya Toure

"Who is doing the criticising?" wondered Luiz Felipe Scolari at an event in Sao Paulo last week. "Some people in other countries have an interest in this. If you Brazilians watch them play, you'll see that they are important for their teams - they're just not important for the journalists in the cities where they are playing."

According to this view, criticism of Barcelona striker Neymar, 22, and Tottenham midfielder Paulinho, 25, has little to do with the pair not living up to expectations at their new club sides. Instead, it is all part of an attempt to destabilise Brazil's World Cup build-up.

This sheds some light on the paranoia which is a small, but not totally insignificant, part of Brazil's footballing mentality.

Dunga, the 2010 World Cup coach, took it further. In his eyes, calls around the globe for the team to revert to the kind of football the men in the yellow shirts played in, for example, 1982, was part of a fiendish plot to ensure Brazil did not win.

It never seemed to enter his mind that for millions of fans around the world the flowing play of past Brazil sides represents an aesthetic value in itself, and it was something everyone was desperate to see again.

But in one aspect Scolari surely has a point. The club form of Neymar and Paulinho is not necessarily of great relevance to Brazil's World Cup challenge.

In the case of Neymar, a bedding-in season was only to be expected, made more difficult by the need for Barcelona to find their way in the post-Pep Guardiola era. Paulinho, meanwhile, has found himself at a club that appears to have invented the concept of the permanent transition.

Did you know? Over 14,000 Brazil fans signed a petition demanding that Neymar be called up for the 2010 World Cup finals after he was not named in then head coach Dunga's squad. They were unsuccessful.

With Brazil, on the other hand, there are no such troubles. Scolari's side has been so settled that the first team now practically picks itself. Neymar and Paulinho slotted straight back in for last month's 5-0 win away to South Africa.

Neymar did not even need to play outstandingly well to score a hat-trick.

But the Brazil attack is built around Neymar. Wide on the left, he is often the Brazil player highest up the field. He receives the ball early in the move, usually with space to cut inside. And in Fred, Neymar has a centre forward proficient with his back to goal, ready to exchange passes or slip in a pass behind the defensive line.

Paulinho also benefits from an understanding with the central striker, since the most impressive part of the Tottenham midfielder's game is the timing of his forward runs. Against South Africa, one of Neymar's goals was set up by Paulinho after he had combined with Fred.

Scolari, then, can brush off criticism of these players as he did earlier in the season when David Luiz was not getting a game for Chelsea. That, he happily declared, was Jose Mourinho's problem.

Now with Toronto, Cesar, 34, is getting a regular game and seems ready to form the last line of defence in a team which, at full strength, has been the same since the friendlies against England and France at the start of last June.

The side looks like this: a back four of Daniel Alves, Thiago Silva, Luiz and Marcelo; Luiz Gustavo and Paulinho in central midfield; a line of Hulk, Oscar and Neymar and Fred at centre forward. Assuming there are no further injuries - and so long as Neymar recovers from a foot injury - this will be the team in Scolari's mind when the squad meet up in the hills outside Rio in just over a month's time.

But the World Cup is like time speeded up. Over the course of the tournament line-ups can change as injuries occur and form fluctuates. Who, going into the 1966 World Cup, for example, would have imagined that England would win the trophy without Jimmy Greaves, and with Geoff Hurst as the hero centre forward?

There is no guarantee that Scolari's first-choice line up will be the one that ends the World Cup. There is not even any guarantee that these favoured players will start in the first game against Croatia on 12 June. Before then there are training sessions, and warm-up matches against Panama and Serbia - all opportunities for fringe players to push their claims.

Did you know? Paulinho started his career with Lithuanian club FC Vilnius but left when they were relegated to join Polish side LKS Lodz.

And club form cannot be completely discounted. Fernandinho, for example, has had a splendid season in the enviable context of sharing the Manchester City midfield with Yaya Toure. Can the 28-year-old carry that same form into the World Cup?

He was recalled for the match against South Africa, where he did not look entirely comfortable playing in Gustavo's holding role in the first half. But he was far better - and scored a cracking goal - when pushed further forward after the break, where he filled Paulinho's normal slot. The Tottenham man, then, needs to look sharp in training.

Then there is 22-year-old Chelsea star Oscar, whose midfield versatility makes him a key player for Brazil. But he has had a lot of football over the past three years. If he is a bit jaded, his Stamford Bridge team-mate Willian might be an option.

Willian, 25, was successfully introduced to the squad towards the end of last year, and quickly made a favourable impression on the Brazil coach. His time could come - if not at the start, then at some point during the tournament.

One man will judge; and coach Scolari's criteria will have little space for what his players have been doing for Barcelona, Tottenham or on PlayStation. 'Big Phil' will stand or fall solely by what he thinks his players are capable of contributing to the national team between 12 June and 13 July.

What are the World Cup stadiums being used for after the World Cup? Attendances in the Brazilian League surely aren't good enough to fill these large, expensive stadiums. Kieran Kirschner

An interesting point, since one of Fifa's justifications for awarding the World Cup to Brazil was the hope that the investments could increase crowds in local games.

The average attendance in last year's first division was just below 15,000. There is no reason to believe that this can't be increased. Indeed, in this year's Copa Libertadores, the two best-supported sides in the group phase were the Rio de Janeiro pair of Flamengo and Botafogo, both of whom play in the Maracana, one of the main World Cup venues.

Those stadiums in the heartlands of the Brazilian game will be extensively used - though the debate about ticket prices is not going to go away. And the hope is that investments in the North East will help football there punch its weight at national level.

More problematic are the grounds outside the heartlands. The viability of Manaus and Cuiaba are open to question. And then there is Brasilia, the most expensive of the 2014 venues, in a city where local teams draw tiny crowds. One ruse appears to be for clubs from elsewhere to stage games there - Flamengo, who have large support in Brasilia, played their opening match in the Brazilian Championship there on Sunday.

But it is hard to see this as anything but counter-productive in the long term, since it hampers the efforts of the local clubs to build a fan base. It also interferes with the integrity of the league, which should surely be based on the premise of the 20 clubs meeting each other home and away.