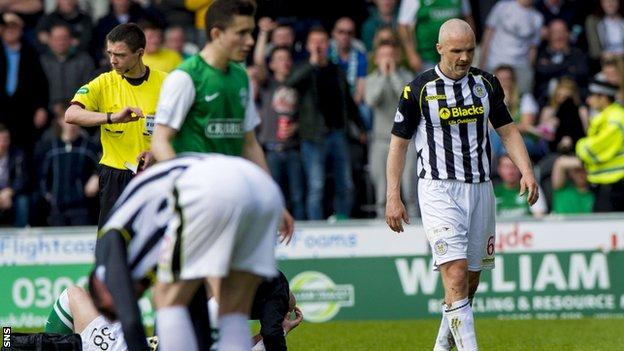 St Mirren have confirmed an appeal against the weekend red card shown to Jim Goodwin, freeing their captain to face Partick Thistle on Friday.

Buddies boss Danny Lennon told BBC Scotland: "He's no angel, but he didn't deserve to be sent off, so we're appealing."

Goodwin was sent off after 28 minutes of the Premiership win over Hibernian for a tackle on Kevin Thomson.

Lennon said Goodwin had the backing of everyone at the Paisley club.

And the manager suggested that the hard-tackling Irish midfielder had been unfairly targeted in the top flight.

"The staff and the players are 100% behind our captain," said Lennon. "He's a great leader, a great character and, more importantly, he's a great guy.

"I feel that, over the course of this season, there's a 'bad boy' tag out there for Jim; a villain if you like.

Goodwin, who had received 14 yellow cards before his first straight red of the season, will now be able to face Thistle in a game that could be crucial to the five-team battle to avoid a relegation play-off.

"He's a player that, if you had to ask the other four managers, they'd all want him in their team," added Lennon.

"So I can understand why perhaps there's over-reactions. Opposition players are now taking the opportunity to make things seem worse than what they were.

"It's unfair on the referees. The decisions and the way they have to go about their business is as difficult as it can be.

"It's something that happens in worldwide football, but it's something we could do without in our beautiful game."