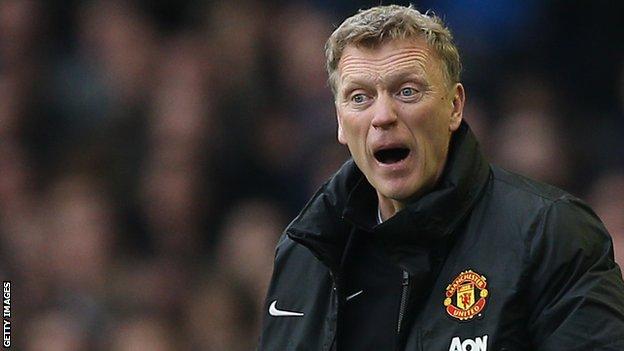 The sight of the Grim Reaper wielding a scythe in the direction of Manchester United manager David Moyes when he returned to Everton was part publicity stunt and part black humour.

And yet, with all manner of irony, it was the humiliation Moyes suffered at his former club that sounded the death knell for the Scot and provided the signal for United's owners the Glazers to mark the end of an error.

The sight of Everton, the team he left behind after 11 years last summer, outplaying United with a verve and swagger under Roberto Martinez that has barely been seen since Moyes succeeded Sir Alex Ferguson, was clearly the final straw.

And the sound of Moyes talking up aspects of an abject United performance in the 2-0 defeat only confirmed the long-held suspicion that he simply could not come to terms with the standards the club and their supporters demand.

United's hierarchy have done their best to be supportive of the man they handed a six-year contract on the advice of Ferguson but the evidence of their own eyes has convinced them they cannot afford to slide any further. The planned summer overhaul could not be entrusted to Moyes.

The sacking of the 50-year-old will also be a personal embarrassment for Ferguson. His endorsement of Moyes, a manager he saw in his own younger image and likeness, has proved to be a flawed one.

United may now be regretting taking the unusual step of allowing a manager, no matter how successful, to hand-pick his successor in an organisation of such scale. If there is blame to be apportioned, Ferguson must take his share.

But the unknown factor was how a manager who had never won silverware and had only overseen two Champions League qualifiers in a creditable Everton career would cope with the unique demands of Old Trafford.

The answer was that he could not.

There are, of course, mitigating circumstances. Most regular observers of United admitted the squad that won the title was not vintage, propelled towards the Premier League by one last transfer market flourish from Ferguson in the shape of Robin van Persie. 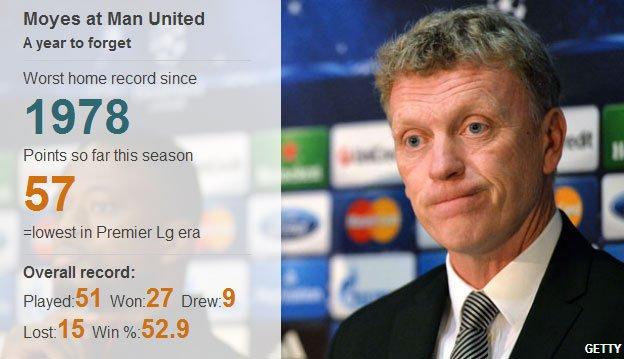 Moyes was cut this slack but the decline from champions to marginal also-rans simply had to be arrested.

Everton's win left them 12 points ahead of United. It also left the reigning champions 23 points behind leaders Liverpool, officially out of Champions League contention for the first time in 18 years and struggling to even qualify for the Europa League.

United went out of the FA Cup at home to Swansea City in the third round, lost the Capital One Cup semi-final on penalties over two legs to Sunderland and a sign of their declining status was confirmed when a 4-2 aggregate defeat by Bayern Munich in the Champions League quarter-final was almost given the gloss of a moral victory.

The Glazers, ruthless though they are, would have accounted for transition. What they would not have counted on was the feeling that Moyes might manage a terminal decline - hence the decision to remove him.

Moyes did have to tackle that flawed squad but the bottom line is that he has engineered his own downfall by simply not being up to the job.

The transfer of expectations from Everton to those at United has proved too much for him, indeed almost from the time he came through the door.

Moyes either could not, or would not, speak the language of positivity expected at United.

A prime example was when he labelled Liverpool as favourites for their recent visit to Old Trafford.

The words would never have been dragged from a screaming Ferguson. Liverpool manager Brendan Rodgers said he would not have delivered a similar message even if they had been bottom of the league.

On arrival he seemed in awe of the job in hand, rarely showing the steely determination and defiance that marked him out at Everton.

The road to his departure almost started at the very beginning, with a dreadful summer in the transfer market - not helped by rookie executive vice-chairman Ed Woodward.

Within days of his arrival Moyes backed away from deals the club had in place to sign Barcelona midfielder Thiago Alcantara, who later joined Bayern Munich, and Benfica centre-back Ezequiel Garay.

Then, main targets such as Barcelona's Cesc Fabregas,Everton full-back Leighton Baines and even the plan to try and re-sign Cristiano Ronaldo came to nought.

In their place came what seemed to be an almost panic-stricken £27.5m expenditure on Everton midfielder Marouane Fellaini, the identikit of the sort of player United did not need and whose sole attraction seemed to be that he was available.

And even though Juan Mata was widely hailed as a fine signing at £37.5m from Chelsea in January, he never came accompanied by any sort of clear plan as to where Moyes might immediately use him.

Moyes was also guilty of throwing the baby out with the bathwater when he assembled his backroom staff.

It was understandable he would, as most managers do, bring the bedrock of his previous Everton staff with him in assistant Steve Round, long-time cohort Jimmy Lumsden, goalkeeping coach Chris Woods and former United player Phil Neville.

But to dispense with the likes of Mike Phelan, in particular, looked unwise at the time and nothing has happened to change that view.

Surely it would have been better to keep a reliable, trusted figure who had played such a key role in the Ferguson era, who could advise him on some of the potential pitfalls?

Ryan Giggs was added to the backroom team to give it an added United presence but that has always looked more of an arranged marriage of convenience than part of a carefully-assembled strategy.

There was a sense that Moyes never carried the faith of United's players - that he was a man out of his depth handling the bigger stars who would question his methods (and perhaps more pertinently his record) than those who followed him at Everton.

Training sessions were understood to be long and tactically laborious, in contrast to the short sharp work of the Ferguson, Rene Meulensteen and Phelan era. Whatever approach Moyes was employing, it resulted in removing the exciting cutting edge that was the hallmark of Ferguson and replaced it with a blunt instrument.

Some will say, with a measure of justification, that the players should have adapted but it is difficult in any walk of life to settle for something inferior when you have sampled success brought by the best.

Moyes has also struggled to get the best out of the injury-troubled Robin van Persie, with constant speculation about their personal relationship denied by the manager.

One unqualified success for Moyes was his relationship with Wayne Rooney, still trying his heart out for United and his manager in the final seconds of misery at Goodison Park.

There is irony there, too, in that Moyes and Rooney parted on sour terms when he left Everton as a teenager and was intent on leaving United when he arrived as manager.

Moyes handled this stick of dynamite left behind by Ferguson deftly, with Rooney producing outstanding form and also pledging his long-term future to the club.

On the pitch, however, Moyes provided the sort of natural caution that often drew criticism from Everton fans.

The cavalier attacking policy of Ferguson was in complete contrast to his successor's approach, which must have come as a culture shock to a very patient Old Trafford gallery.

Add 11 Premier League defeats from 34 games and this has proved the sort of grim evidence that has led the Glazers to cut Moyes adrift, even with a six-year contract.

This has led United to the decision that Moyes is not the man to spend a transfer budget well in excess of £100m that they expect to use in the summer to right the current wrongs.

Moyes has not shown a sure enough touch on the pitch or in the markets to provide a compelling case to stay - and the question remains whether a man who has no serious track record of silverware would have the reputation and profile to attract stellar names to Old Trafford without the cushion of Champions League football to fall back on.

There will be sympathy for Moyes. The task of succeeding Ferguson was always going to be a poisoned chalice. However, he inherited the Premier League champions, no matter how in decline they were, and spent £65m adding to that squad.

It will also pain Moyes that his final game ended with the derision of Everton fans ringing his ears.

It was a desperate 90 minutes for the Scot on his old ground, hearing his fractured relationship with his former supporters being spelled out in graphic terms.

Of greater significance for Moyes and United was that Goodison Park was the place where they finally decided he was no longer up to the task of managing Manchester United.