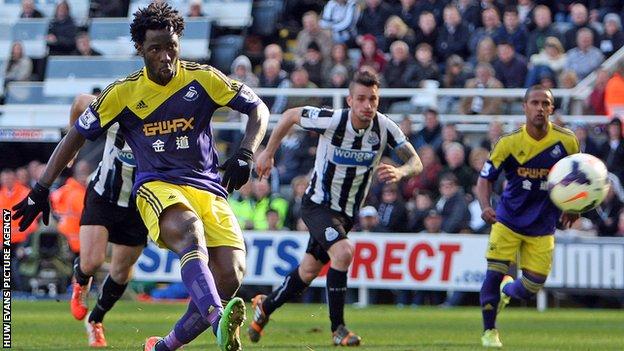 The striker is expected to play for the Ivory Coast at the World Cup in June.

Bony scored twice in the Swans' 2-1 win at Newcastle on Saturday, moving them six points clear of the relegation zone.

"If someone comes in for him in the summer it's going to be difficult for us to hold onto him maybe," said Davies.

The Ivorian signed for Swansea in July 2013 for a club record £12m deal from Dutch club Vitesse Arnhem.

The 25-year-old has had a great start to his first season, scoring 21 goals in all competitions for the Swans.

"He's an incredible player for us and someone who's been exceptional really," said Wales international Davies.

"Someone who gets that many goals in a team that's really been down the bottom of the Premier League is incredible.

"He's great to have around the camp. He's someone everybody here loves playing with and we're all just really happy with him banging the goals in.

Bony's goals have helped the Swans steer clear of the bottom of the Premier League.

A win at home against Aston Villa on Saturday could secure their top flight status for another season.

Davies says although Bony's form is bound to attract attention from other clubs, the Swans would not have it any other way.

"If you're going to be scoring goals at the standard that he [Bony] is then there is going to be interest," said Davies.

"I can't really say that we would want it any other way.

"We really want to keep him here and hopefully he can repeat what he's done for us this year next season."