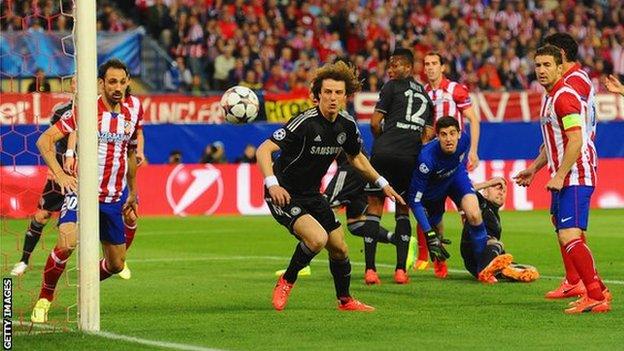 The Blues lost Petr Cech to a shoulder injury that ended the keeper's season.

But replacement Mark Schwarzer only had one serious save to make, the 41-year-old veteran denying Mario Suarez.

Chelsea's best chance fell to Ramires, but the midfielder fired well wide in a hard-fought tie of few chances.

"Chelsea haven't been adventurous. They were disciplined and well-organised which you would expect from Jose Mourinho. They've done a professional job, which you have to give them credit for. They're very professional which is why they go so far in these competitions."

As well as Cech, Jose Mourinho's side also lost captain John Terry to a foot injury which will force the defender to miss the rest of the domestic campaign, although he could still feature in the Champions League final on 24 May should Chelsea get there.

News of their injuries overshadowed what was a job well done as far as Mourinho was concerned, with the Chelsea manager's defensive tactics paying off as Atletico failed to score for the first time in 11 games in this season's competition.

Yet the evening could not have started worse for the Premier League club in the Spanish capital as Czech Republic international Cech ended up in a heap after colliding with Raul Garcia while keeping out a 17th minute corner.

Los Rojiblancos had netted 22 times in their previous 10 games, but the Blues overcame Cech's loss to produce a stubborn defensive performance which gives them every chance of making their third Champions League final in seven seasons.

Substitute keeper Schwarzer had been guilty of gifting one of the goals as Chelsea's Premier League title hopes faded with a shock 2-1 home defeat by Sunderland last Saturday.

But the veteran, making only his second appearance in the competition, was key as Mourinho's side secured their first clean sheet on continental soil since October.

The Australian's full-length dive to keep out Suarez's powerful shot in the 34th minute was his finest moment.

While Terry, before his injury, and Gary Cahill dealt comfortably with Atletico's danger man Diego Costa, chances were few and far between for the visitors.

This is Jose Mourinho's eighth Champions League semi-final as a manager. Of his previous seven, he has gone on to make the final on two occasions.

Ramires shot wastefully wide after a rare powerful surge into the Spanish half, while lone striker Fernando Torres was so isolated that he was unable to hurt his former club.

Terry's night was cut short in the 73rd minute after colliding with team-mate David Luiz.

Atletico finished strongly, Schwarzer keeping out Gabi's free-kick, while substitute Arda Turan spurned a glorious chance to earn his side a lead to take to Stamford Bridge when he headed wide from close range.

John Mikel Obi will miss the return leg, as will Gabi, after both received cautions for a late skirmish. Frank Lampard was also booked and will not play next week.

The 35-year-old midfielder will hope he has not featured in his last match in this season's Champions League.