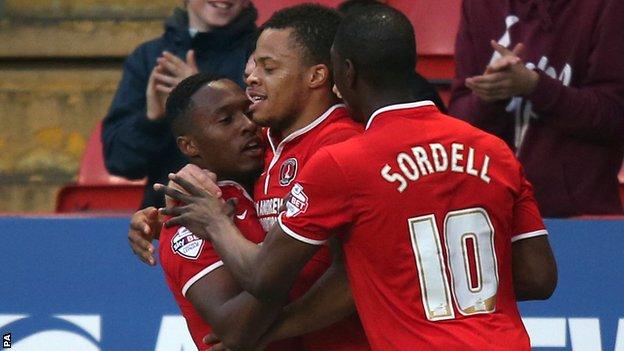 The winger, 20, gave his side a half-time lead with an angled drive from just outside the penalty area.

Harriott scored again with a left-footed volley, before Hornets winger Albert Riera was sent off.

Former Spain international Riera, who spent two seasons with Liverpool, had already been booked when he was dismissed for a foul on Lawrie Wilson.

Victory means Charlton are five points clear of the relegation zone with one match to play.

Owner Roland Duchatelet sacked manager Chris Powell in March and replaced him with Jose Riga, who agreed a contract until the end of the season.

Belgian coach Riga, the former technical director of AC Milan's academy, has earned six wins from his 14 matches in charge to lift the Addicks off the bottom of the Championship and away from trouble.

Harriott had fired over an early chance from eight yards before he opened the scoring in the 22nd minute, gathering a pass from Jordan Cousins out on the left before hitting a 20-yard drive across keeper Jonathan Bond and into the far corner.

A patched-up Watford side, struggling with injuries and suspension, drew level after the break when Deeney smashed in his 24th goal of the season with a spectacular volley.

But 10 minutes later Charlton were back in front when Jackson took Morgan Fox's left-wing cross on his chest - and although the midfielder's initial effort was blocked by Bond, he managed to nudge in the rebound.

Charlton head coach Jose Riga, who is out of contract at the end of the season, on his future:

"Let me enjoy the present before thinking about it. The future I have to discuss, I don't know when.

"If you ask me if I enjoy the competition, the club, the fans, then yes. I like England. We have a good foundation here and I think Charlton has a very good future.

"But I know about football, it depends on the situation. It's not a problem. I've done my job and it's enough to be really happy."

"I'm not happy, so on Wednesday all the squad will be at the training ground because we are professional.

"We have to work hard to prepare for Saturday.

"The players' contracts run until the end of June so we will keep working after Saturday. We need to build a team for next season with a different DNA."