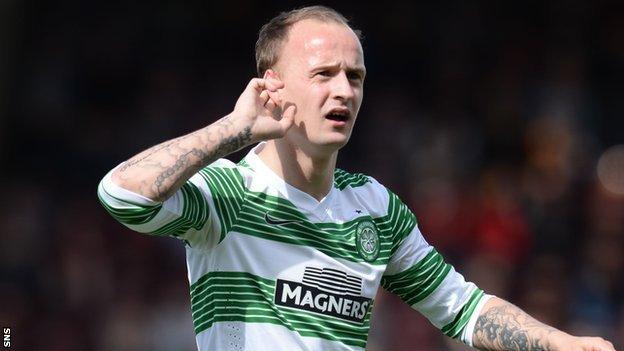 A Scottish FA hearing into allegations against Celtic striker Leigh Griffiths has been delayed because of a police probe into the same incident.

The Scotland forward had been accused of singing offensive, racist or discriminatory songs about Hearts.

Griffiths was due to appear before the SFA on Thursday.

But the parent body has announced that the case has been adjourned until 22 May to allow Police Scotland to conclude its criminal investigation.

The SFA said the delay was the result of a request from Griffiths's solicitor.

The 23-year-old striker had initially been charged by the SFA of "not acting in the best interests of Association Football by singing in public about Hearts in administration".

Following the release of more video evidence suggesting he had joined Hibs fans in singing a song calling former Hearts player Rudi Skacel "a refugee", a more serious offence of "singing in public a song of an offensive, racist and/or discriminatory nature" was added.

Celtic are carrying out their own investigation, but manager Neil Lennon has said that he expects Griffiths to remain with the club next season.