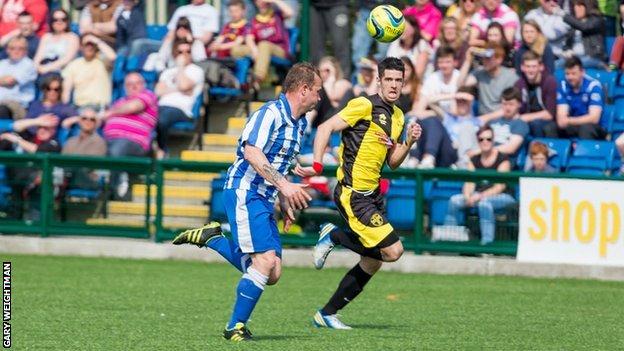 St George's manager Chris Bass has claimed his side are the "greatest in Manx football history" after they demolished Ramsey to win the Manx FA Cup in fine style.

Bass's team thrashed the northerners 10-2 at the Bowl on Monday to smash the record for goals scored in a Manx FA cup final.

The win means they remain on course for a second grand slam in three seasons.

Bass said his side are "capable of rewriting Manx football history".

He said: "I am most pleased that we made history by scoring the most goals in a Manx cup final.

"It just makes you wonder how many records this team can break because they are such a great side - in my opinion they are the greatest side in Manx football history."

This season St George's have already won the Premier league for the eighth time in 10 years, the Railway Cup and Manx FA Cup.

Victory in the Hospital Cup would complete the set.

Vice chairman of the Isle of Man FA, Tony Mepham, said: "Fifteen of the 16 players in their squad are full island internationals, including the entire first team.

"In terms of trophies won they are certainly the best Manx team - their record is incredible."

Bass's side produced a performance full of attacking intent and verve to fully deserve this historic win against Ramsey.