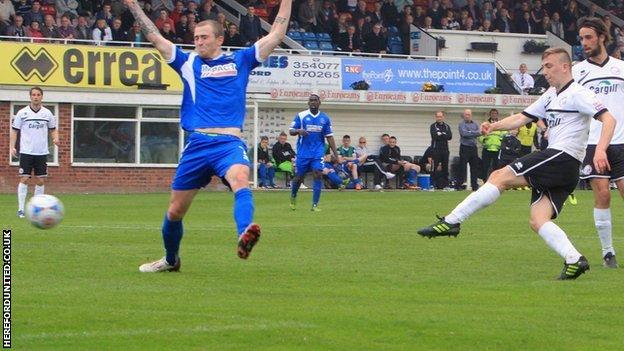 Hereford United striker Jarrod Bowen says scoring his first senior goal, which could help keep the relegation-threatened club in the Conference Premier, was an "unreal" moment.

Bowen, 17, got the Bulls' third goal in their 3-2 win over Alfreton to take the 21st-placed side's survival fight to the last game of the term at Aldershot.

He has the confidence he has to play me and, hopefully, I've paid him back

"I'm over the moon, to get the goal and win," Bowen told Hereford & Worcester.

"The way I caught it and the way it went in was unreal."

The Leominster teenager, making his seventh appearance for the Bulls this season, admitted he was wondering when his first goal was coming after several near misses.

"I was having a few shots that were getting saved and I thought 'is this going to be my day?'," Bowen said.

"I swung my foot at the last one and thankfully it went in.

"I saw a few of my mates in the second half and I thought, if I scored, I'd run to them. I was so happy, I didn't know what to do," he added.

"He's known me since the youth team so he knows how I play," Bowen said.

"He has the confidence he has to play me and, hopefully, I've paid him back."

Hereford's win was their second in four games but their position, both on and off the field, remains precarious.

Despite a series of cost-cutting measures and the recent avoidance of another winding-up order over unpaid taxes, the club's financial situation is still troubled.

The Bulls are currently in the Conference Premier drop zone, two points adrift of safety, and know they have to win at Aldershot in their last game of the season to stand any chance of staying up.